As Zander Smith on GENERAL HOSPITAL, actor Chad Brannon wound up on the wrong side of the law, but now he’s fighting for law and order on the Amazon Original Series BOSCH as Sergeant LaForest! “Stoked to jump in on this great show!” Brannon posted to Instagram when he broke the news of his appearance. And now that he’s on set and filming, the actor has shared a sneak peek of his new role… and who doesn’t like a man in uniform? 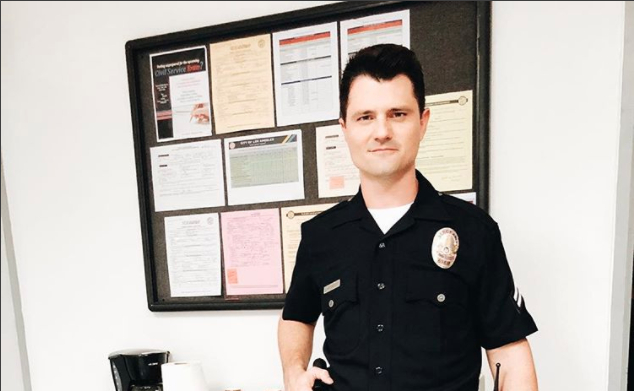 BOSCH stars Titus Welliver as Los Angeles police detective Harry Bosch, and is based on the series of books from Michael Connelly. Over its three seasons, some familiar daytime faces have made appearances. In season one, GH alum Annie Wersching (ex-Amelia) starred as Rookie cop Julia Brasher and Mark Derwin (Ben, ONE LIFE TO LIVE; Mallet, GUIDING LIGHT) had a recurring role as Captain Harvey Pounds. GL’s Monti Sharp (David) made an appearance in season three. Although season four of BOSCH is currently filming, it isn’t slated to premiere on Amazon until early 2018.

Brannon joined the cast of GH in 200, and was killed off in 2004, the same year he won a Daytime Emmy Award for Outstanding Younger Actor. In 2009, he made a brief cameo appearance as a Zander look-alike to usher Natalia Livingston (who was playing Emily look-alike Rachel) off the canvas. Since leaving daytime, Brannon has found success in primetime with roles on shows like CSI, COLD CASE, and FRIDAY NIGHT LIGHTS. He’s also done a lot of voiceover work for animated series like THE CLEVELAND SHOW and videogames like Lost Odyssey. And in 2008, FOX hired Brannon to be one of the main network announcers.

As soon as we have more information on when Brannon’s episode of BOSCH is available to stream on Amazon, we’ll be sure to let you know. Until then, check out his personal behind the scenes photos below!