Eagle-eyed viewers of GENERAL HOSPITAL will notice recently that Haley Pullos is wearing a cast in her scenes as Molly. Well, that’s because back at the end of March, the actress broke her arm!

Wearing a cast in a scene with Kelly Monaco (Sam) on June 22. (Photo Credit: ABC)

“Here’s the official story,” she posted to Instagram at the time. “I was walking in my neighborhood when I spotted a tiny kitten in the middle of the street. Just then, a car came barreling directly toward the kitten! I knew she was too little to get out of the way in time, so I ran over, did a somersault, scooped her up in my arms just in time and got her to safety. Unfortunately, I landed on my elbow wrong during my somersault, and broke my arm.”

MUST SEE: Bryan Craig Insists a Return to GH “Is Not Impossible!”

But then the young star revealed what really happened: “Now here’s the unofficial (but true) story: I was walking down the street, tripped over my own feet and fell backwards. I reached my hand out to break my fall but instead I broke both the bones in my forearm. Yes, I really am that klutzy.” 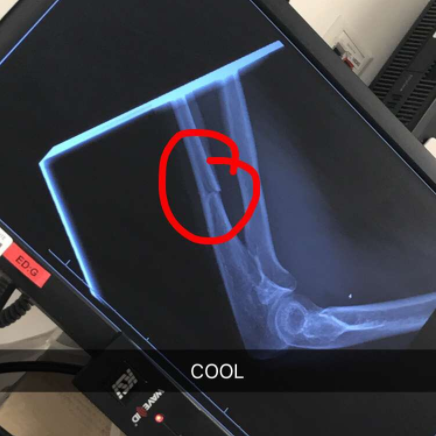 MUST SEE: Laura Wright Opens up About Her Divorce and Finding Love Again!

Pullos shared a snap of her X-ray showing the bad break, and you can clearly see in her selfie that her entire left arm was in a cast past her elbow and her hand looked badly swollen. But darned if the young star doesn’t still look super cute, even with a broken arm! She should have the entire cast of GH sign that cast and auction it off at the next fan event!

Pullos always takes a great selfie no matter what the conditions, as you can see in her photo gallery below!

At the end of may, Pullos tweeted a photo after she’d finally had her cast removed, but of course, because GH tapes so far in advance, she was still wearing it when she had to report to the studio to play Molly for these scenes!