Thirty-five years ago, over 30 million viewers tuned in to GENERAL HOSPITAL to watch Anthony Geary and Genie Francis tie the knot as Luke and Laura. In fact, the nuptials of GH‘s most popular supercouple remains the highest-rated hour in soap opera history!

The wedding took place over two episodes that aired on Monday, Nov. 16, and Tuesday, Nov. 17, 1981. While tons of friends and family attended the ceremony officiated by the Mayor of Port Charles at his official mansion, not everyone was thrilled about the union. Luke’s sister, Bobbie, didn’t approve of Laura, but the two women were able to reach a truce. Not so with Helena Cassadine, who appeared at the wedding reception to place a curse on the happy couple. And the character was played by none other than screen legend Elizabeth Taylor, who was a big fan of the soap! 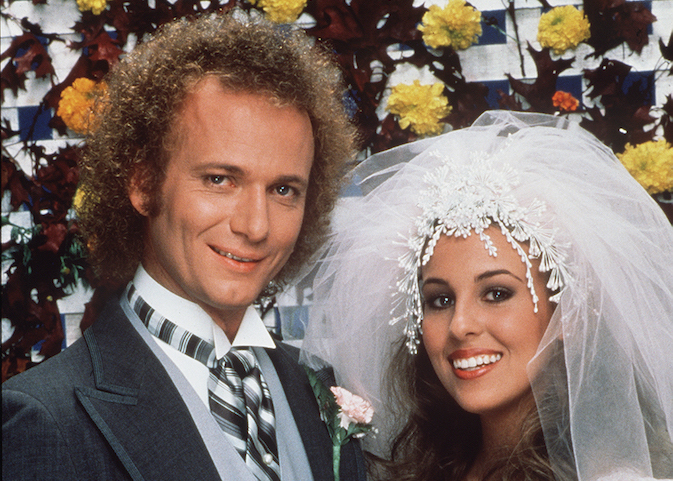 The wedding ended on a sour note when Laura’s ex, Scotty, caught the bouquet and threatened to contest their divorce, and the couple were split up when Laura disappeared mysteriously a year later, but the pair always found their way back to each other, and were happily married for years, having a son, Lucky, and a daughter, Lulu, together. And to this day, Luke and Laura remain the gold standard for soap opera supercouples!

A lot of work went into shooting those spectacular episodes on location with tons of actors and extras. Relive how the magic of that unforgettable wedding day came to be in our special flashback gallery below featuring beautiful photos from the classic episode, including some behind-the-scenes shots featuring legendary GH producer Gloria Monty! Just be careful Helena doesn’t put a curse on you!