After James Patrick Stuart shared a photo of his wife with Michael E. Knight, a fan suggested that his GENERAL HOSPITAL character, Valentin, invite Tad and Dixie to Spoon Island for a dinner party! The actor joked: “How great would it be if Franco and Liz ran into them at a couple’s retreat?”

Stuart worked alongside Knight as Tad and Cady McClain as Dixie when he appeared on ABC sudser ALL MY CHILDREN as Will Cortlandt back in the ‘90s. And he’d love to see both actors back on daytime, especially if it was on GH! “Cady, would you ever consider a cameo on GH with Michael Knight?” Stuart tweeted to his former co-star. “I’d just love it if Maura West (Ava) ran into Tad and Dixie on a flight back from Miami Beach!” 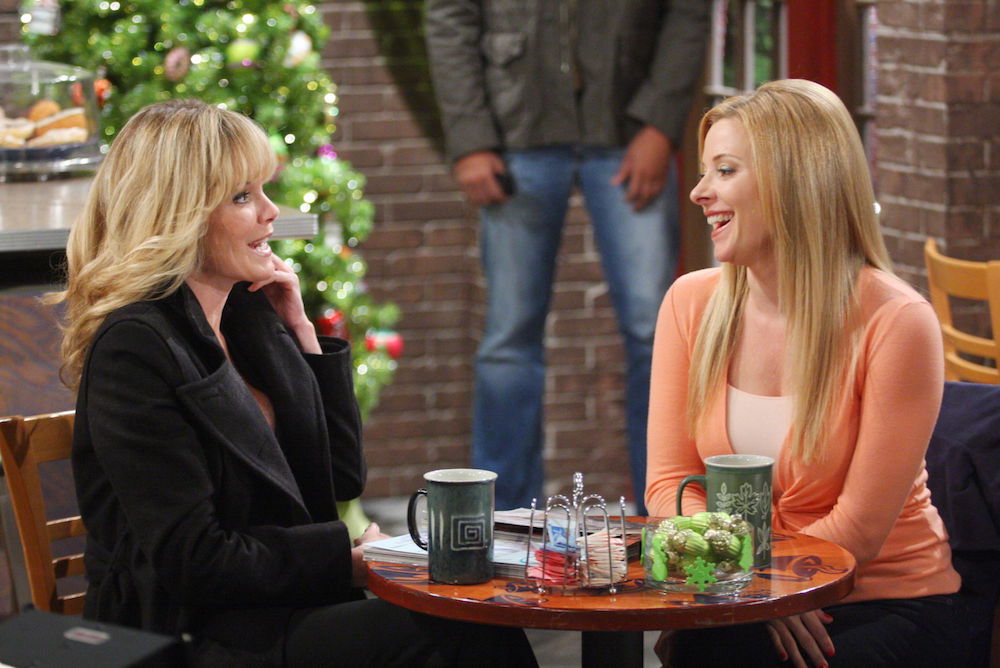 The siblings didn’t always get along this well on ATWT! (Photo Credit: George DeSota/jpistudios.com)

If Ava ran into Dixie, it wouldn’t be the first time that McClain and West would share the screen. The two actors appeared together on the CBS soap AS THE WORLD TURNS from 2003-2010 when McClain took over the role of Rosanna Cabot, sister to West’s Carly Tenney. “So glad I had the opportunity to play with her as an actor,” McClain tweeted back to Stuart. “And you, too, oh TV brother of mine! So many siblings!”

If Tad and Dixie paid a visit to Port Charles and ran into Sonny, it would also reunite their portrayers with Maurice Benard, who before joining GH, started his acting career as AMC’s Nico Kelly! And if Dixie had to pop into General Hospital for some reason, she could run into Kevin Collins, who is played by McClain’s real-life husband, Jon Lindstrom (Who also played Craig Montgomery alongside her and West on ATWT!)!

Happy Oscar Sunday! Hanging at home with the pups, having champagne and popcorn! Hope u have fun whatever u r doing…

Unfortunately, this is all just a fantasy cooked up by Stuart, but it would certainly be a lot of fun to see Tad and Dixie again, even if only briefly. Especially for fans of AMC who have been missing all the residents of Pine Valley since the long-running soap came to an end in 2011. It wouldn’t be out of the realm of possibility now that ABC has the rights to AMC and ONE LIFE TO LIVE back (Hillary B. Smith brought her OLTL character of Nora Buchanan to GH for a couple of brief stints), but it’s just a fun idea for now!

Everything You Need to Know About Kevin’s Evil Twin, Ryan