Fans of GENERAL HOSPITAL who were disappointed that Magic Milo didn’t make an appearance at this year’s Nurses Ball can take heart that he will be back in Port Charles soon as Milo Giambetti’s portrayer, Drew Cheetwood, revealed his return to the soap when he shared a shot of his GH script on his Instagram story! He’ll be taping two episodes on Friday, June 8, so look for Milo to show up somewhere around the Fourth of July holiday. 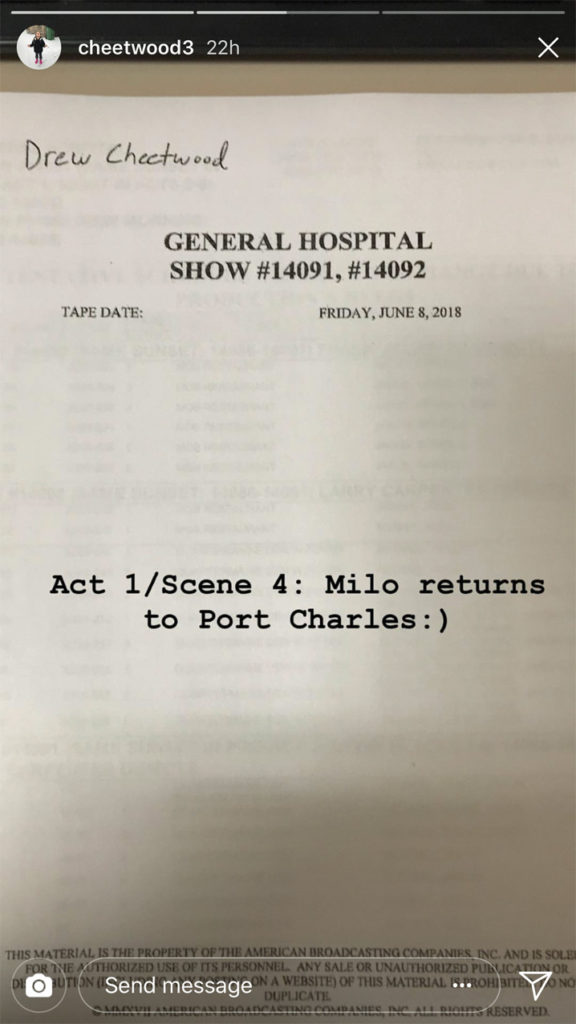 Cheetwood has been keeping pretty busy in real life with the birth of his third child on Feb. 16, a daughter named Everly Drew. The last time we saw Milo on screen was back in September of 2017 when he was keeping an eye on Josslyn for Sonny and Carly to keep the teenager out of trouble. The actor also used Instagram to let fans know when he was back on set at the soap.

Over the Fourth of July weekend last year, Cheetwood teased his return to GH by posting: “Soapy Saturday at my parents today,” along with a close-up of an old Soaps In Depth cover where he was featured alongside Dominic Zamprogna (Dante) and Emme Rylan (Lulu). “See you soon, Port Charles.”

Cheetwood first appeared on GH in 2006 when Milo was introduced as a bodyguard for Sonny and Jason. He pursued Lulu, then later briefly dated Sabrina. In 2014, he finally worked up the courage to ask out Epiphany, and the two became a couple. Unfortunately, Milo has been relegated to the back burner after Cheetwood’s departure from Hollywood, with his most recent appearance being at the 2016 Nurses Ball.

In 2015, Cheetwood moved to Michigan with his wife, Jenna, and their daughter, Grace, but let GH executive producer Frank Valentini know that he’d always be up for future appearances on the soap whenever the schedules could be worked out. But Port Charles is always on Cheetwood’s mind, like in June when he shared a snap of his old ID card! “Cleaned out my old ‘Cali Car’ and came across this piece of plastic,” he shared. “Doesn’t seem like this picture was taken that long ago. I’d have to say circa 2009. Crazy.”

Cleaned out my old "Cali Car" and came across this piece of plastic. Doesn't seem like this picture was taken that long ago. I'd have to say circa 2009. Crazy. #zerofacialhair #milo #abc #gh #tbt

While this looks like yet another brief appearance, at least this time around viewers will get to enjoy Milo in two episodes instead of just one. And while he hasn’t yet let slip what he’ll be doing this time around, hopefully by the end of June Sonny will have wised up to Nelle’s scheming against Carly and enlisted Milo to help put a stop to things before they get even further out of hand!

If GH Wants to Bring Back Jeff Webber, We’ve Got Some Casting Suggestions!