At the end of the May 23 episode of GENERAL HOSPITAL, fans were treated to a powerful closing montage set to a hauntingly beautiful song with a chorus that intoned: “I’m sorry for breaking you… I’m sorry for breaking us” as the residents of Port Charles wordlessly reflected on the choices they’d made to bring themselves to this point in their lives.

Kiki and Griffin had sex after the Nurses Ball, and judging from the nod that Sam gave Jason to get him to join her in the elevator to leave the hospital, they seemed to be heading in the same direction. Having learned that her boss was the man she had been trying to locate and bring out of hiding, Lulu cried at her computer feeling like a complete fool.

HIs own part in Peter’s charade exposed, Valentin toyed with a glass of scotch as Nina took her bags and walked out on him. As she closed the door on their life together, Valentin let the glass tip over and spill onto the floor, lost forever. Dante watched as Anna entered the interrogation room and reached out to Robert. He took her hand and then took her into his comforting arms for an embrace. 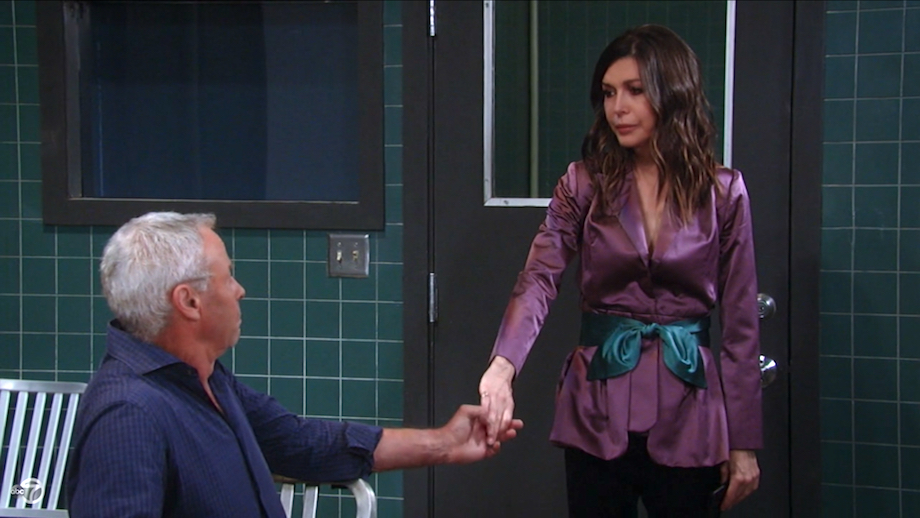 Robert will always be there for Anna. (Photo Credit: ABC)

At the hospital, Detective Chase watched as Peter had his head examined by a doctor, and you could see in Peter’s eyes the regret he felt from deceiving everyone around him and also the determination not to let it get in the way of the life he’d built for himself in Port Charles. And in her hospital bed, Maxie reflected on Peter helping to deliver his baby, now knowing that he is really Henrik Faison, Nathan’s brother.

They say a picture is worth a thousand words, and this wordless montage said so much through the emotive camerawork and the actors’ subtle portrayals. The haunting song is titled “How the Story Ends” from Secret Wonder, and if you’d like to download it, you can get it on iTunes and Amazon. If you missed this unforgettable montage or just want to watch it over and over again, here you go!

Why GH Dedicated That Nurses Ball Episode to Rick Pessagno