Things are looking up for Peter in these GENERAL HOSPITAL spoilers, but there are others who could be in big trouble! Nina has a suggestion for Valentin, Sam and Curtis are caught breaking and entering by the D.A., and Jason’s attempts to keep Carly safe could come to an abrupt end!

Valentin attempted to woo Nina back by decorating her office like their tent from Morocco, but the gesture fell on deaf ears as she blasted him for being nothing but trouble for her. However, now it seems Nina may have a way for the Cassadine to make things up to her. “This could be your most romantic gesture ever,” she suggests. What does she have in mind?

Anna shares a drink with Felicia at the bar to open up about all the recent drama in her life and her desire to locate her son. “Who’s comforting you?” Felicia asks as someone reaches out to touch Anna’s shoulder. Can the spy open up to her friends? 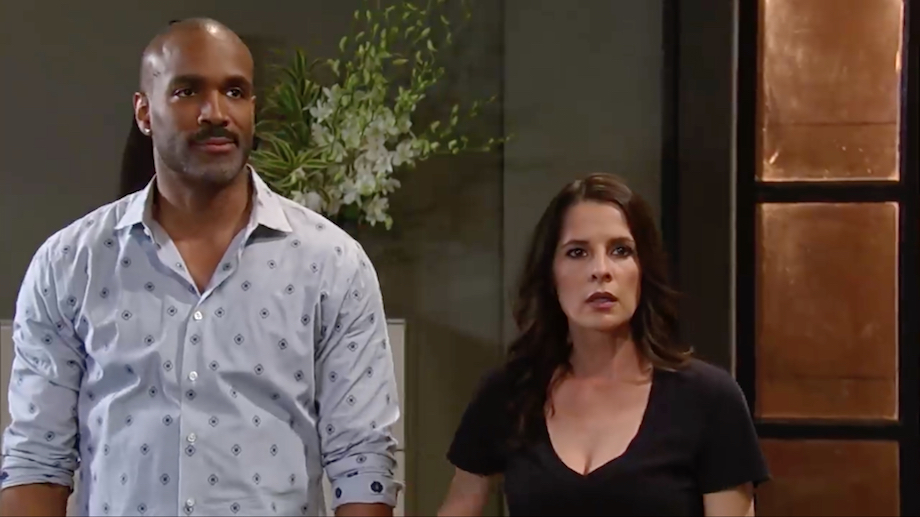 How will Curtis and Sam talk their way out of this one? (Photo Credit: ABC)

When Jordan approaches Maxie, she knows exactly what the commissioner wants from her. “You want to talk to me about Peter,” Maxie predicts. And meanwhile, Faison’s son is still being held prisoner in the shack where Obrecht announces a slight change of plans for her captive. “Keeping you alive is looking more interesting,” she muses. But might that be worse for Peter?

Also on the hunt for Peter is Curtis and Sam, who broke into his room at the Metro Court to look for clues to lead them to wherever he’s disappeared to. Unfortunately, it turns out that the room now belongs to the new D.A, Margaux Dawson, and she’s not happy! “As far as I’m concerned, you’re breaking and entering,” she announces, dialing her cell phone. Is there anything the investigators can do to keep themselves from being arrested?

At Ferncliff, Carly was feeling a little safer knowing that Kevin was on her side and Jason had taken a job as a custodian to keep an eye on her and protect her from the orderlies and Nurse Mary Pat. However, she may be about to lose one of her friends! “I think Dr. Collins is gonna turn me in!” Jason informs her. Can Carly keep things from going from bad to worse?

Brooklyn Rae Silzer Didn’t Let a Fractured Wrist Slow Her Down at All!