Over the years, Kirsten Storms has suffered from some health issues that have forced her to take breaks from playing Maxie Jones on GENERAL HOSPITAL. And during this most recent leave of absence, certain hurtful comments from fans caused the actress to open up on social media and confess to her ongoing struggle with depression. “When I finally commented on my Instagram about my depression and how severe it had gotten,” she told Soaps In Depth, “that helped validate what was going on with me.”

After Storms tweeted to her fans that she would be back on GH “soon-ish,” they began wondering when Maxie would return. But when a fan tweeted: “When she realizes how badly drugs are ruining her life?” Storms responded firmly but confidently. “I actually suffer from severe depression,” she posted. “But kudos to you for being cool enough to tag me in that. #keeptrollin”

In the comments of one of Storms’ Instagram photos, a frustrated fan wrote: “You are beautiful but I get kind of tired of you not being truthful to your fans what’s going on,” which again inspired the daytime star to speak out. “I try to keep my personal issues private,” Storms replied, “however I recently mentioned on Twitter that I suffer from severe depression. If you or someone you know has dealt with it, then you know it can be a difficult time in life. I’m doing much better as of late and look forward to returning to work soon.”

The actress also hoped that coming clean about the real reason behind her temporary leave from the soap would help others as well. “Depression’s something that a lot of people suffer from,” Storms confided, “maybe not as severely as I have, but with the amount of fans who follow me, I thought there had to be a few who go through this and even some moms who have gone through post-partum stuff and can relate to that feeling of just not being able to help yourself. Especially having a daughter, it got to the point where I needed to change my life for the better. And I wanted people to know why I was getting better.”

Storms also took inspiration from GH castmate Maurice Benard (Sonny) and his public struggle with bipolar disorder. “He’s a god to me at work,” she raved, “and he’s shown me you can live with a mental illness, be a totally normal person, and kick ass at what you’re doing.” 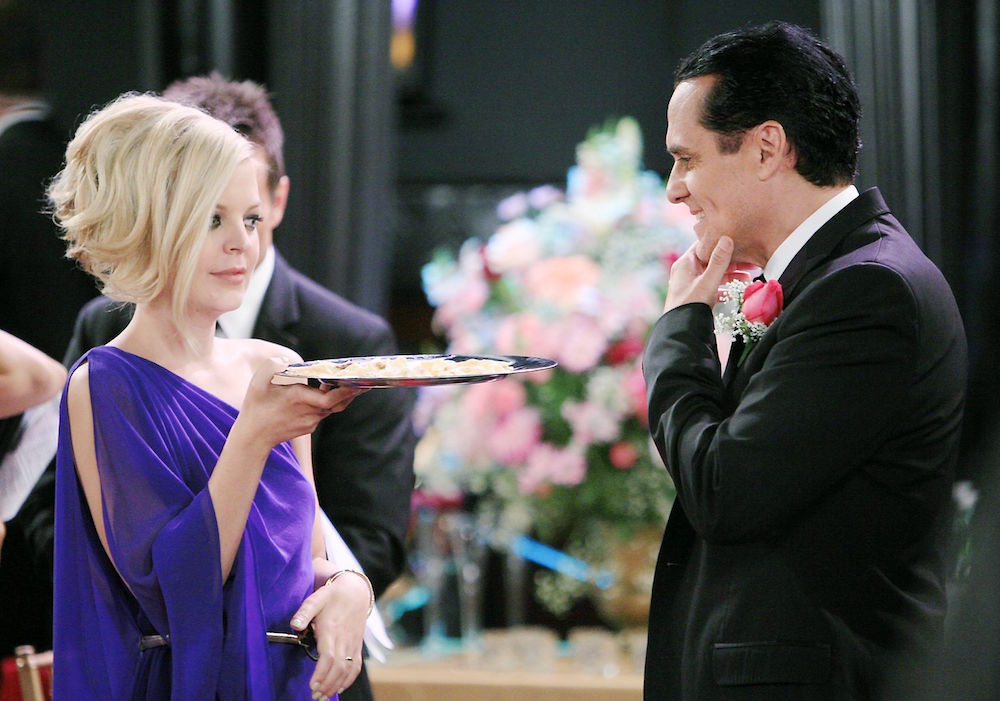 Storms and Benard in a 2012 scene from GH. (Photo Credit: Howard Wise/jpistudios.com)

And Storms does seem to be happy, having returned to social media in April after taking a few months off. She’s given herself a makeover, spent quality time with her daughter, Harper, and even enjoyed a date night out with a new guy! Plus, she’s back to work at GH so Maxie can stir up more drama in Port Charles. “I was so ready to jump back in,” Storms admitted. “So much of my identity is in working, because I’ve been working on soaps for so long. So once I started to truly feel like myself again, working at GH was missing from my life!”