Previously on GENERAL HOSPITAL: After Ava agreed to recant her testimony against Valentin, he gave her information about the burn clinic. Ava was escorted by the mysterious Larissa to a Russian clinic, where she shared her fears with a bandaged patient. Back in Port Charles, Griffin worried about his friend and, after Sonny questioned his feelings and his place in the church, the doctor begged Anna to track down Ava. Meanwhile, with Charlotte worried about an ailing friend, Lulu finally began to co-parent and bond with Valentin… only to have Dante show up and tell her about the deal he’d struck with Ava!

Will Jason Ever Wake Up?

With her husband still showing zero brain activity, Sam insisted he’d be better off at home than in a long-term care facility. Spinelli almost convinced her to reconsider… but then Jason moved! Sadly, Griffin explained that it didn’t mean Jason was actually recovering. After talking with Sonny, Sam finally agreed to move her husband into a facility the next day. Curtis later had another chat with Sonny. After Jordan spotted them together, she told her beau he’d have to choose between her and the crime boss.

Intent on learning more about the photo of himself and Jason as boys, Franco visited Heather, but she refused to see him. When Obrecht warned him not to trust the liar’s story that he was Jason’s twin, Franco invited adoptive mom Betsy to his art opening. She agreed to tell all… only to disappear! After an anonymous buyer managed to purchase Franco’s twin painting — which wasn’t actually for sale — a protester threw paint at his exhibit and Elizabeth. Though he decided against pressing charges, Franco was more committed than ever to finding the truth… so he slipped into Jason’s room at the hospital! 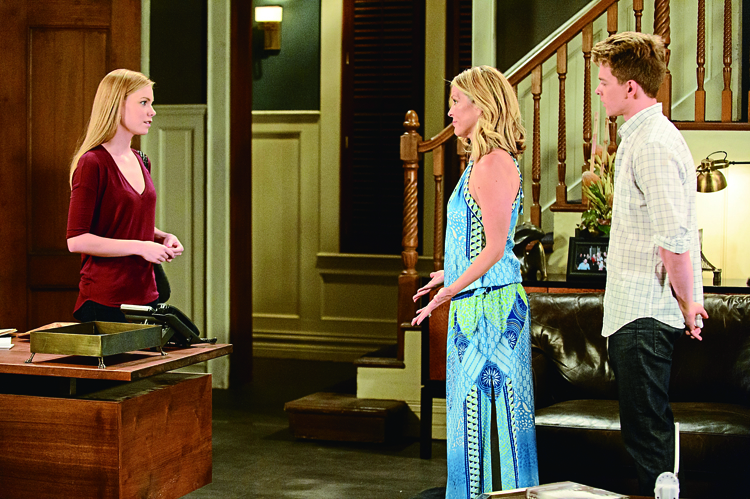 ”Nelle, this even looks bad to my mom, and she used to be a hooker!” (Photo Credit: Valerie Durant/ABC)

After Carly told Michael about his girlfriend’s dead fiancé, Nelle told him her version of events, swearing she’d tried to save his life. Despite this, the man’s suspicious clan had contested his will and blocked her from attending the funeral. When Bobbie confronted Nelle, Michael defended her and they declared their love. Kiki offered Nelle advice on how to deal with Carly, but warned that if anything happened to Michael, all bets were off.

Joss Gets a Bodyguard

Sonny refused to let Carly move back in with him for her own safety, unaware there was an intruder in her home! It turned out to be Oscar, who’d misunderstood Josslyn’s message and gotten roughed up by Milo for it. Sonny apologized and, after explaining the danger to Joss, revealed that Milo would be protecting her for the time being. Oscar’s mom didn’t know about his new relationship, but Joss’ bodyguard got an eyeful of the kids sharing their first kiss.

After rehab, Finn was annoyed by Anna — who asked after his well-being, but was obviously focused on the diamond. She wanted the doc to use his expertise to get to Cassandra, the ailing, dirty-dealing woman connected to the bling. He tried to refuse, but Anna found a way to basically force his hand.

Spinelli’s on the Case

Maxie hoped to use unmasking Man Landers as a way to get her job at Crimson back, but Nathan was so upset by the idea that she dropped it. Amy, misunderstanding Spinelli’s interest in Ask Man Landers, was shocked to learn that the detective was investigating fraud charges regarding the book! Things got even more complicated when Spinelli later saw Nathan and Amy sharing a hug and, naturally, got the wrong impression.

Is Tamara Braun Coming Back to GH?