While Valentin and Anna freed themselves, and Nina searched desperately for her husband, Cassandra found Finn and blew opioids in his face. The drug lord threatened to keep the doc addicted so he’d do her bidding only to up the ante by pulling out a syringe full of drugs. Before she could inject Finn, however, he lunged at her… and when Anna showed up, Cassandra was the one on the floor! Finn collapsed and was rushed to GH with a near-fatal overdose — leaving Anna wracked with guilt. As Finn started going through withdrawal, however, the budding couple shared a warm reunion. Then he told Anna he’d killed Cassandra! Once the villainess was found alive but comatose in an alley, she was taken into WSB custody and Finn wanted to confess… only to learn Cassandra’s lackey Erich had already done so. As Erich’s timeline fell apart, however, Jordan and Anna became suspicious of Valentin — who promised Nina no one would ever know what she’d done! After a flashback revealed Nina injecting Cassandra, Valentin opened his nemesis’ computer and deleted Claudette’s photo from it. Anna, meanwhile, returned home to find Finn gone. Had Jordan made him doubt their romance? 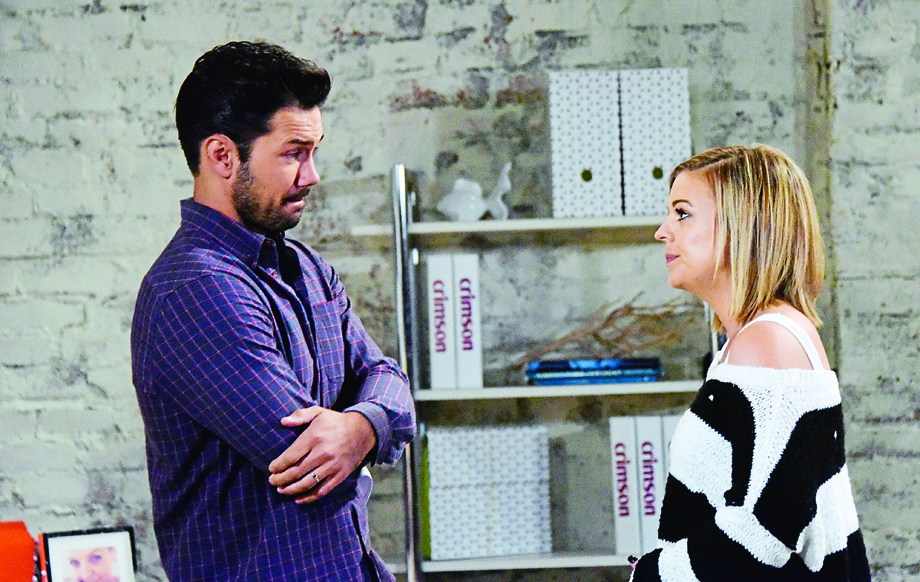 ”Maybe it’d be cool to have a mini evil genius around the house!” (Photo Credit: XJJohnson/jpistudios.com)

As Nathan awaited his DNA results, Obrecht led a baby shower gift scouting expedition and Lulu used the outing to get a lead on Faison. Nathan showed up with confirmation he is not a Cassadine. Obrecht initially tried to argue with the DNA test, but finally revealed that he was Faison’s son. Spinelli, Jason, and Sonny, meanwhile, discussed P.K. Sinclair and the burnt manuscript — which was about a power struggle between father and son! They theorized the villain’s offspring had written the book and, after Obrecht’s big reveal, they had to wonder if Faison had two sons — because Nathan certainly didn’t write it! When Maxie realized the implications of carrying Faison’s grandchild, she begged Sonny to drop the search. But Nathan seemed determined to locate his father!

On the Haunted Star, Jason pulled away from his kiss with Sam, not wanting to hurt her. Of course, as soon as she began to acknowledge their connection, Drew showed up, so Jason left. After Sam grumbled over Carly’s obsession with reuniting her with Jason, she insisted she only wanted to be with Drew and kissed him… but she couldn’t help remembering the moment she’d shared with his brother. Carly apologized to Jason for her machinations, even though she was happy to see that her scheme might have paid off. And when Sam railed at her later, Carly countered that she knew something had happened with Jason — which Drew overheard! Sam avoided confessing about the kiss by suggesting she and Drew get married at city hall, pronto. Unfortunately, she was still maried! Sam was forced to ask Jason for a divorce. Even as they prepared the paperwork, the chemistry was palpable. Still, she insisted that kissing him had been like kissing a memory, so Jason suggested their grounds for the divorce be irreconcilable differences — he’s in love with her, but she’s not in love with him. Alexis cautioned Sam that if Jason was wrong about her feelings, marrying Drew wouldn’t change them. 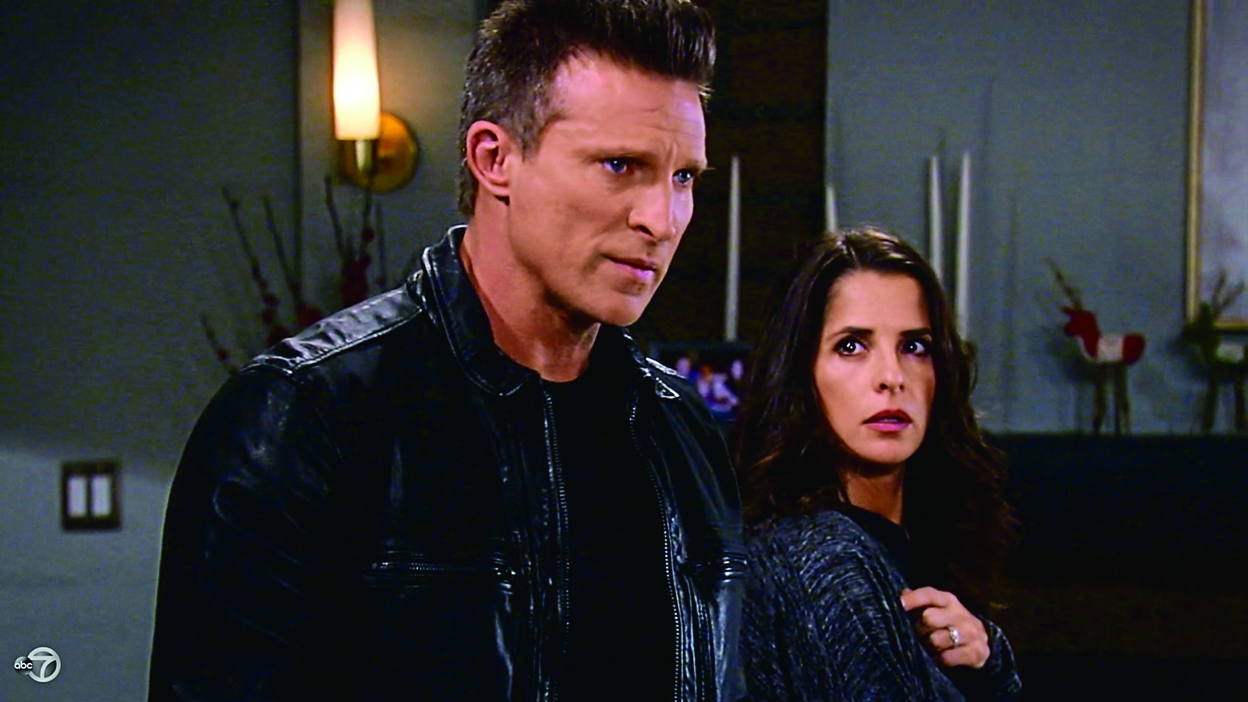 Griffin was so adoring when he called Ava that she got over her jealous suspicions and surprised him at GH. Unfortunately, she caught him with Kiki again and, after throwing yet another fit about her scarred face, stormed off. Griffin chased her down to reveal what he and Kiki were actually doing together — figuring out how to finish Klein’s protocol! With the final treatment on her face approved, Ava promised a sleeping Griffin she’d be ready to declare her love once she was whole again. She also made peace with Kiki — who was crushed after her reunion with Dillon was blown by weather-related issues.

Even though his secret kept him up all night, Franco still didn’t tell Elizabeth about supposedly having pushed Drew down the stairs as a child. After Kiki suggested he might be stuck in the past, Franco finally fell asleep… only to have a sweet dream about himself and young Drew. Once he awoke, Franco realized he should figure out why he would ever have tried to kill his best friend. Later, he and Liz set their wedding date for next month. When Franco returned with champagne for a toast, he found her talking to Jim Harvey — who called him Bobby, claimed to have dated Betsy when Franco was just a kid and offered to buy his art studio! Franco tossed the business card aside. 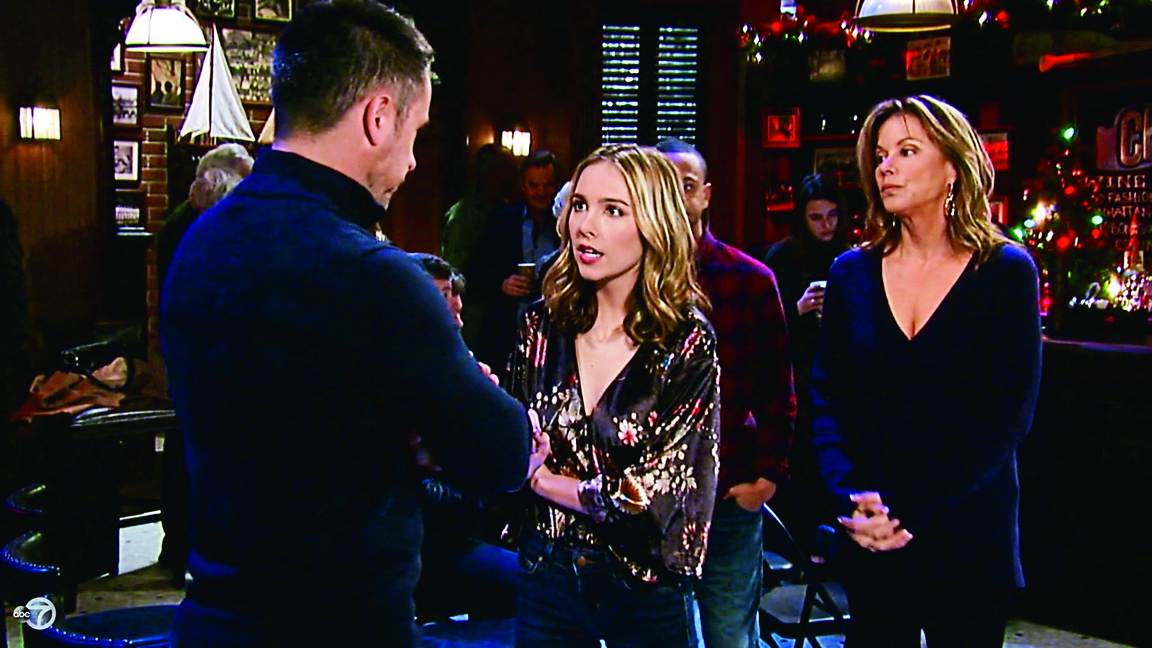 ”My mother wants nothing to do with you, Julian! Oh, and could we have another round of drinks?” (Photo Credit: ABC)

While Julian met with Olivia about shoring up his relationship with Leo, Alexis was at his pub with T.J., Molly, and Curtis. The kids wanted to sue their abusive landlord, and Curtis was happy to help. Worried, Alexis realized she might need Julian’s help, too. When Molly started a rent strike, Alexis balked… only to be reminded by her daughter that in the past, she never would have stood down from a fight like this! When an eavesdropping Julian offered to be Molly’s backup, she turned him down flat, making it clear that her mom was hot for Bensch now.

After once again clashing with politically correct Michael over the Charles Street District development deal, Ned quit ELQ and decided to run for mayor. After meeting developer Jim Harvey, Laura decided to throw her hat into the ring. While the candidates agreed to run a clean race, gentrifier Jim was glad to have Ned on his side. Michael, meanwhile, decided to play nice with pregnant Nelle due to her low blood pressure. Nelle, for her part, started working at Ava’s gallery… only to have Carly show up! Displeased by this turn of events, Carly made it clear to Nelle that this would be trouble!

Ryan Carnes Is Returning to GH