Though it wasn’t clear how they’d actually use it, Jason and Anna rushed to retrieve the disco ball containing Drew’s memories. Unfortunately, Anna had donated Andre’s ornament to Toys For Tots… and someone had retrieved the memory stick from inside! As Jason was updating Drew, Danny arrived. Already grappling with his confused marital status and past, the Navy SEAL was crushed to see Danny so easily embrace Jason as his father. Jason received his own paternal gut punch, however, when he went to see Jake and his son not only ran away, but found comfort with Franco. Amid all the drama, Drew made inroads with Oscar and got engaged to Sam. Hearing this news, Jason promised Sam he wouldn’t fight her for the penthouse or Aurora Media.

Nathan couldn’t help wondering if Victor Cassadine was really his father — especially after finding no sign of the Cassadine-carried condition beta-thalassemia in the medical records his mother gave him. When Obrecht brushed it off, Nathan asked Griffin to check the records for him. Maxie, meanwhile, procured a lock of Valentin’s hair and without her hubby’s knowledge, pressured Amy to run a DNA test to confirm whether Nathan was a Cassadine.

With charges against him dropped, Julian was thrilled to reconnect with Danny — not to mention question Alexis about why she’d fled his bar so quickly! Though Alexis was seeing Bensch, the chemistry with Julian was palpable. She even returned to Charlie’s Pub in hopes of seeing her ex… only to stumble into Mayor Lomax’s town hall meeting. In spite of Laura’s impassioned speech against gentrifying the Charles Street District, Lomax seemed to have the votes — which had Ned suggesting ELQ take on the controversial project. That night, T.J. and Molly felt targeted for speaking out against the project when their landlord cut their electricity and heat. The kids, Alexis, Stella, Curtis, and Jordan had to move their holiday celebration to Julian’s pub — which was where Ava and Griffin ended up, thanks to the approaching storm. After Molly and T.J. learned the nearby shelter was also impacted, Ava inspired everyone to come together to feed the homeless on Christmas. 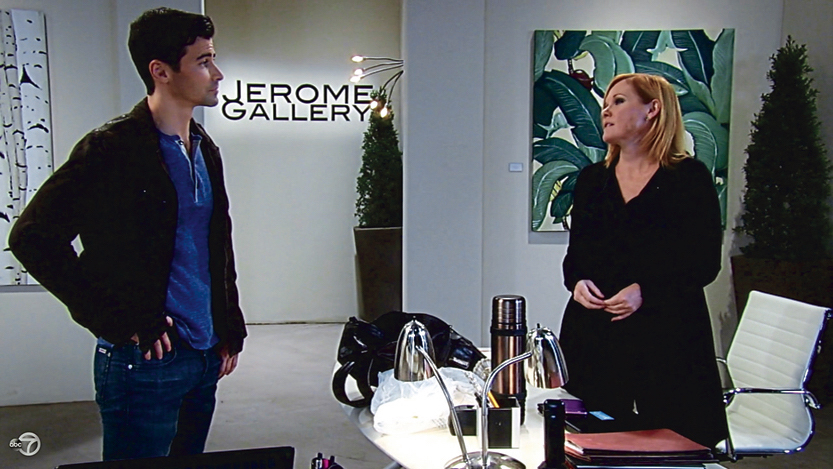 Laura and Kevin Got Hitched!

With Kevin and Laura’s wedding approaching, the minister was called away and all their out-of-town guests were delayed by the storm — except the mother of the bride! Lesley and her Italian beau, Marcello, rode an ATV to the event. As luck would have it, Marcello was able to serve as officiant! Meanwhile, Lulu teamed up with Dante to prove Lomax had stolen the election from Felicia. Not only did Lulu’s Aurora Media story get the mayor arrested, but thanks to Alexis, she had to step down. Before heading off on their honeymoon, Laura learned about the landlord’s bullying, so Kevin took her to the PCPD where she rallied the tenants and offered encouragement to all.

Nelle and Ava bonded after the former had a particularly bitter encounter with Michael and his parents regarding the baby she was carrying. After reopening the Jerome Gallery, Ava hired Nelle (who later showed up at Sonny’s and collapsed in Michael’s arms!). In spite of the heat of her new romance, Ava became suspicious of Kiki and Griffin’s closeness. She was also concerned when he and her brother came to blows! Then, on Christmas morning, Griff claimed his gift for her wasn’t ready, and Ava once again found him in close quarters with Kiki… so she followed them! When she spied them slipping off together at GH, she feared the worst!

Sam and Jason’s Most Romantic Moments on GH

Remembering the Stars We Lost in 2017