After Sam insisted she would stand by Drew even though he wasn’t Jason, Kim prepared to drop some big news on him… only to have the Navy arrive and arrest him for being AWOL! When Alexis couldn’t get Drew out of the clink, Sam called Jason, who came down to confirm the convoluted memory swap situation — which likely explained Drew supposedly skipping out on the Navy. While the Navy reconsidered his case, Drew had to tell Jake that he was his uncle, not his father. Having built a life as his brother, however, Drew didn’t seem interested in reclaiming his own… until he got another shocking bit of info: It turned out he was Oscar’s dad! This put Kim in the position of being able to fill in some blanks, even as Oscar tried to process the information. After Jason pushed Drew about his memories, he finally realized he needed to see his son.

After insisting he was going to let Sam make her own choice, Jason distracted himself with the search for Faison. He, Sonny, and Spinelli followed the clues… only to find Britt instead! She claimed her father — who was not happy about Jason’s resurrection — had used her as a distraction. Faison had even vowed vengeance against the person who was supposed to have killed Jason! Still searching for Faison, the guys uncovered a charred manuscript written by PK Sinclair — the villain’s familiar alias! While Sonny filled in Anna, Britt was taken to the PCPD, where she got to connect with her brother. Unaware that Obrecht had lied about his paternity, Nathan asked his mom to get him Victor Cassadine’s medical history. Instead of telling him the truth, Dr. O placed a call…

In jail, Andre confirmed that he’d done the memory research in an effort to save his wife. She, however, had passed away before he could complete the work. He also counseled Franco as his therapist, while Robin questioned Elizabeth about her relationship — which only convinced her to propose! Franco had planned to ‘fess up, but instead got an engagement ring and suggested they get married as soon as possible. Unimpressed, Sam warned Franco a ring wouldn’t keep Liz from wanting one of the Jasons. 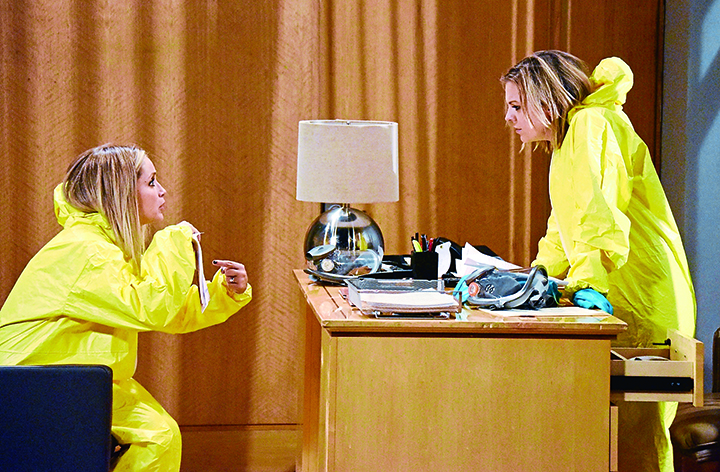 ”These look nothing like they did in the catalog!” complained Lulu. (Photo Credit: XJJohnson/jpistudios.com)

Lulu Got a Lead

Peter August challenged Lulu to bring him a major story if she wanted a gig as an Aurora Media reporter, so she teamed up with Maxie to figure out who’d unmasked Man Landers. Upon learning it was Nelle, they immediately told Michael, who was so mad he threatened to sell the apartment out from under her. In response, Nelle said she was pregnant! Knowing his ex to be a liar, Michael dragged her to the hospital, where Kim confirmed that Nelle was pregnant. It was upsetting news for just about everyone, but Bobbie still wouldn’t let Carly alter Nelle’s medical records to name someone other than Michael the father. Lulu, meanwhile, stumbled onto a potentially huge story when Charlotte shared her Christmas wish list… which was written on the back of a ballot found in Wyndemere!

Ned wanted to buy Drew and Jason out of ELQ, but Olivia and Monica agreed that Alan’s sons should retain their shares. Olivia was less understanding about Julian’s relationship with their son… but after Leo called Ned “Dad,” she let the boy spend time with his real one. Going completely against Anna’s wishes, Finn convinced Cassandra to back his drug research. Wanting to retain control of the situation, Anna moved her faux boyfriend into her place… and things got heated!

Rebecca Herbst Looks Back on 20 Years at GH With Tons of Classic Photos!