After realizing she’d accidentally used Nelle’s disappearing ink pen, Ava called the schemer out. Nelle countered by stoking Ava’s fear of losing Grifin, then blackmailed her into bringing a special gift to her baby shower. Carly tried to play nice but clashed with just about everyone she crossed paths with — including her family. As the shower began, Carly’s efforts to make peace were challenged, but she managed to keep it together when Nelle presented a new document giving her and Sonny guardianship of the baby. Then she saw Ava’s gift to Nelle… and flipped! After skewering Ava for cruelly picking some thing featuring Morgan’s favorite animal, Carly turned on Nelle. Playing it up, Nelle ran out in tears, so Josslyn pressured her mom to go upstairs to apologize. That’s when Nelle revealed a baby blanket eerily similar to Morgan’s! Suddenly, Carly saw Nelle’s scheme for what it was. Instead of denying her machinations, Nelle escalated the fight and brought it to the landing so everyone would hear Carly vow to keep Michael away from her. Then Carly tried to grab the blanket… and in the tussle, Nelle tumbled down the stairs!

As Nelle was taken to the hospital, Monica called the police. Olivia told Chase she’d heard Carly threaten Nelle. Carly insisted the fall was an accident and explained they’d been fighting over the blanket… which had somehow disappeared! After Dante cuffed Carly, she spent a night at the PCPD, all the while claiming Nelle had been gaslighting her. Sonny countered she had no proof and was the one who seemed unstable — which Diane feared wouldn’t bode well in court. With evidence mounting against Carly, Jason put Spinelli on the case. Nelle, meanwhile, woke up to find her baby safe, Michael by her side… and Ava in possession of the missing blanket, determined to keep it safe so that she could use it against her employee if need be. 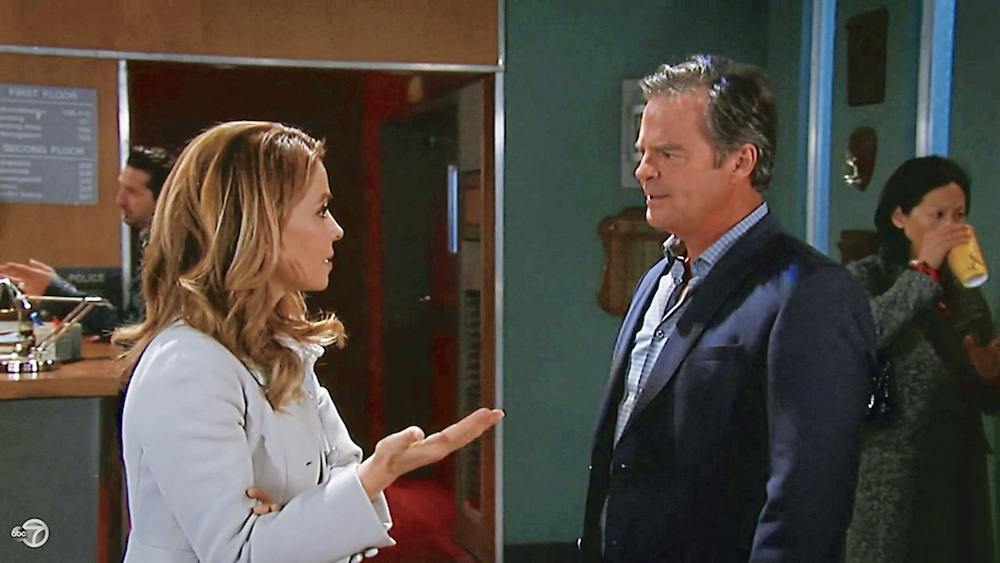 With Mayor Ned worried about Port Charles’ future, Olivia was excited about the video she’d made to help revitalize their city. Unfortunately, Alexis showed up to announce the locals were suing the city!Franco, meanwhile, met with Steven Blake, a victim of Harvey’s who’d stayed connected to the pedophile and even become his company’s VP. With Franco looking for a way to help the other victims, Blake made him an offer. After filling in Liz, Franco shocked everyone by revealing there was no longer a reason for citizens to sue the city.

Jason shared a sweet moment with Jake, followed by a tense run-in with Drew. After Jason updated his twin on the Henrik investigation, and Oscar confessed to wishing he knew more about his father, Drew decided to take control of his own fate — and Andre’s warnings of disastrous consequences didn’t dissuade him. Julian couldn’t help but notice how concerned Kim seemed when Oscar and Drew’s hike went longer than expected. Her relief at their eventual return seemed pretty over the top, too!

When Peter accused Valentin of being blinded by his feelings for Anna, the Cassadine agreed to “deal with” her. Seeing the guys together, Sam interrupted to tell Peter that she’d been planning to step away from Aurora… but had changed her mind. When he encouraged her to quit for the sake of the company, her suspicions were only further piqued. Nina, in contrast, softened to Peter, even suggesting to Maxie that they make the Nurses Ball a double date. She also called Curtis off… so he officially joined Sam’s investigation into Peter! 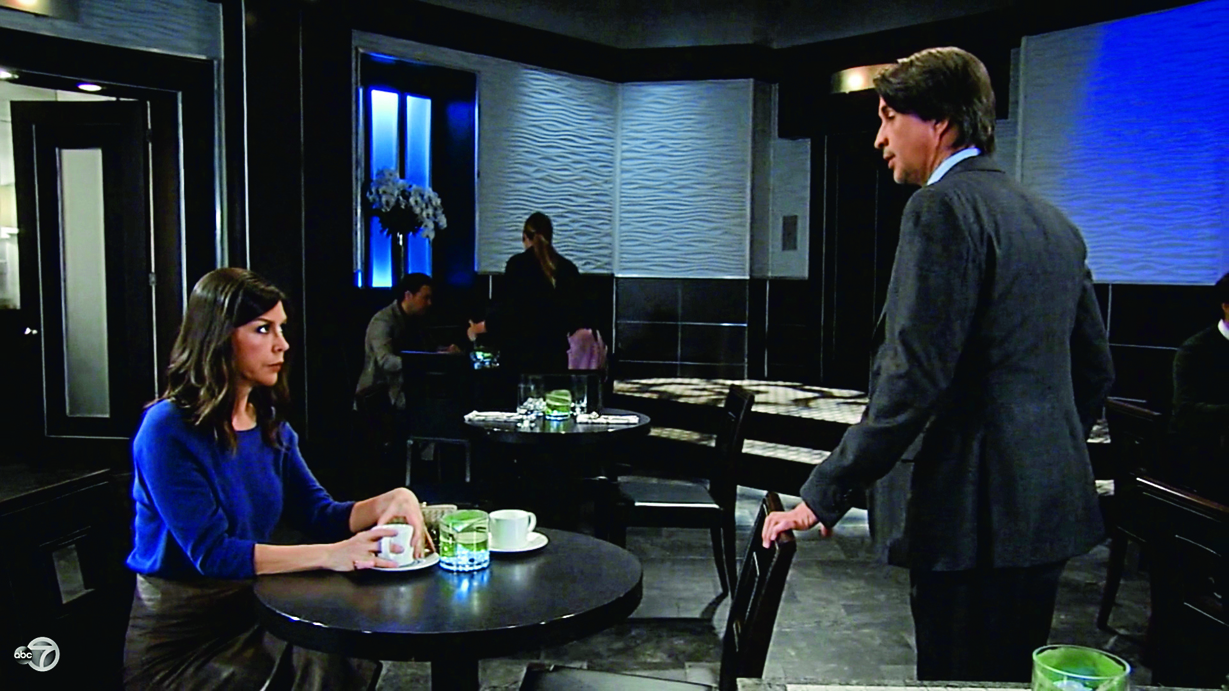 Anna told Valentin she’d dropped the search for her son… even as she reached out to Henrik via E-mail as his mother (without revealing her identity)! Anna sent a second message warning Peter not to trust Valentin, so he held back. Realizing that Anna was still on the case, Griffin warned Peter to skip town. Valentin worried the walls were closing in, but Peter only doubled down on his order that Anna be “dealt with.”

After Alexis apologized for meddling with Finn and his brother, he opened up about his mother’s death, which had inspired his career. He also shared the heartbreak he’d felt when his beloved father moved on so quickly with Chase’s mother. Upon hearing Chase singing in the showers at the police station, Lucy begged the crooner to perform at the ball. Dante bbed that everyone at the PCPD participates. With the newbie sent to rehearsals, Finn and Alexis agreed to attend the big event together — even though he and Anna clearly still had feelings for one another. 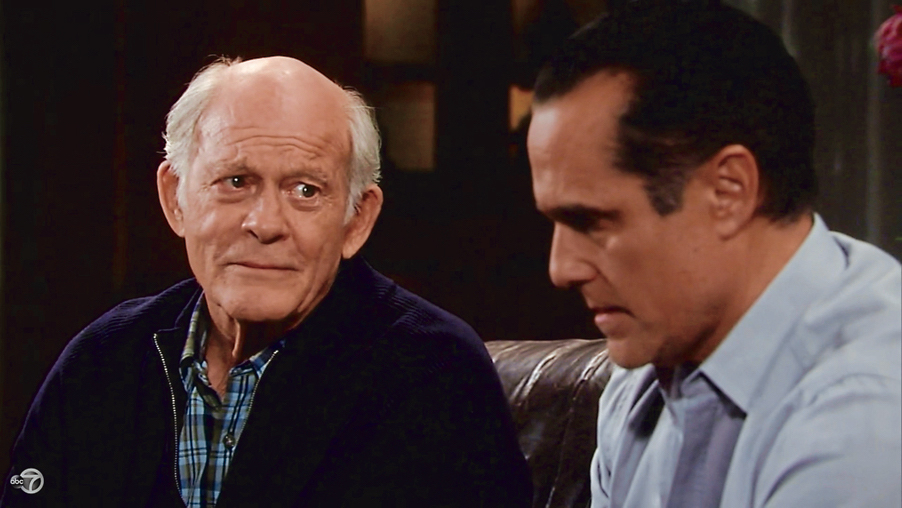 Mike made Sonny dig up his past! (Photo Credit: ABC)

Sonny Dug Into a Mystery

After Sonny confirmed construction was set to begin in Croton, Mike insisted there was nothing to worry about. That didn’t stop the Mob boss from trying to dig up his first kill, with an assist from Jason. Though they found the victim’s money clip, they didn’t find the body or the gun Sonny’d used. Had someone moved them?

As the Nurses Ball pre-show got under way, Olivia realized that Carly had forgot- ten to order food for the event and convinced Cook Two to step in for the night. While guest host Nick Viall of THE BACHELOR worked the carpet, co-host Nina was delayed thanks to Valentin’s effort to surprise her and Charlotte with a vacation — which he secretly hoped meant leaving town forever! With a kidnapped Robert taken down by a heart attack, Peter realized that Anna was playing him.

Vote for the Best Dressed at the 2018 GH Nurses Ball