After Peter’s letter brought Maxie to tears, she was released from GH. Unfortunately, Baby James had to stay in the NICU. Nina, meanwhile, was shocked to find Henrik chained up in a cabin… only to realize Obrecht had taken him hostage! Though hesitant, Nina left him with her aunt, who was determined to get a confession. Nina grappled with Dr. O’s machinations — especially after Liesl used enhanced interrogation methods and Peter’s hand ended up broken. But wanting him to pay for Nathan’s death, Nina continued to aid and abet the kidnapping. Meanwhile, with the mayor coming down on Jordan for having lost Faison’s son, Curtis and Sam were put on the case.

Finn and Anna Made Love!

Finn surprised Anna by joining her on her flight to California. While Anna was filling Robin in on her new half brother, Finn happened to run into his father, Gregory Chase. The tense reunion ended with Finn angrily giving his father the brush off. A crushed Robin, for her part, needed time to digest her mother’s news. After sharing their pain, Anna and Finn went back to their separate rooms… only to do some phone flirting before getting together to make love!

Nelle’s Past Caught up With Her!

Carly’s trial began and, after an unsettling string of testimonies, she was found guilty by reason of insanity — but instead of Shadybrook, she was sent to Ferncliff! After brainstorming with Sam, Jason hatched a plan to protect his gal pal in the asylum. Michael, meanwhile, stuck by Nelle… but only because he was trying to bring her down with Spinelli’s help! And it turned out that Chase was also targeting Nelle. As a young cop investigating the mysterious death of her fiancé years ago, he’d fallen into an affair with the schemer — and he let Nelle know that he’d come to town in order to prove once and for all that she’d committed murder! 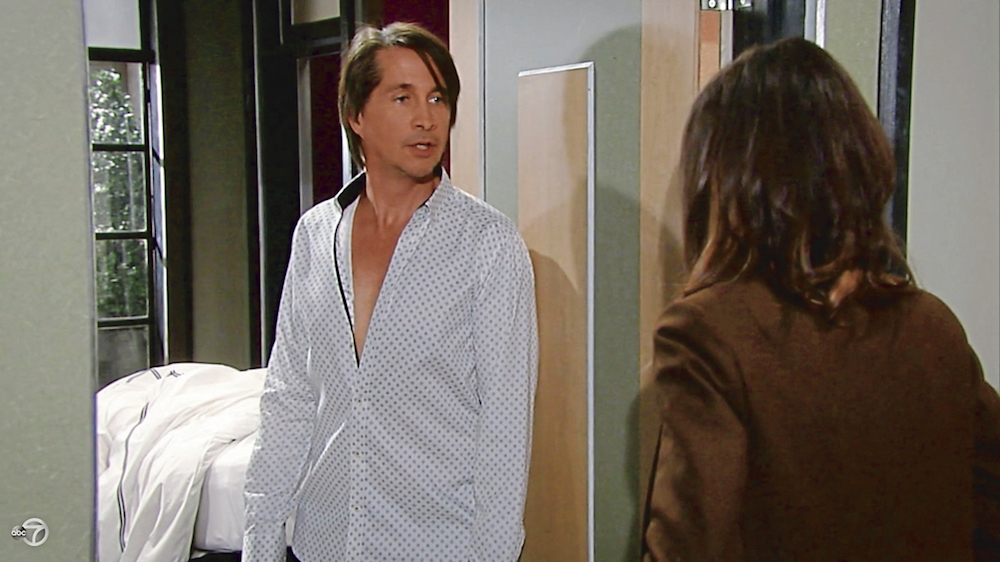 Julian Was on a Mission

Drew — who moved into the Q manse — finally decided against submitting himself to the dangerous procedure to regain his memory. After Kim mentioned a pivotal moment in Oscar’s life that left Drew wondering about their son, he warned her to be wary of Julian. The former mobster, meanwhile, was determined to uncover the identity of Lucas’ child’s birth mother… and realized Kim could be helpful.

Without naming Bensch, Kiki went on the record with Lulu about the doctor who’d been harassing her and how quickly GH had dismissed her allegations. As Kiki’s story reverberated through her loved ones and co-workers, she eventually found herself face to face with Bensch.

With Alexis looking into how her Cassadine background was affecting her taste in men, Valentin showed up with a necklace that had belonged to her mother. He later revealed he had more of Mikkos’ keep- sakes. While bonding with Felix, Mike almost spilled the beans to his new nurse about Croton. With their wedding set for the fall, Franco ignored Elizabeth’s wishes and reached out to her sister via Facebook — and Sarah responded!

All the Fun Pics From John Stamos’ Return to GH