Once Sam admitted that she had feelings for Jason, Drew walked out on her. Crossing paths with Jason, Drew went on the attack, accusing his twin of never taking responsibility for anything. In the heat of the moment, Jason slipped and revealed that he’d kissed Sam on New Year’s Eve. Everything built to a head as the brothers finally came to blows, which landed them at the PCPD. Sam, who’d gotten emotional while packing a bag for Drew, rushed over to get her husband released… only to realize he’d been fighting with Jason. When Sam later told Jason that she was heading out of town to figure things out, he was hurt, but promised he’d be waiting — no matter what she decided.

Drew’s Family Rallied Around Him

Released from the PCPD, Drew went to see his son, who was spending quality time with Josslyn. After Carly and Joss left, the guys bonded and Drew revealed he’d left Sam. Naturally, Kim arrived just in time to hear that bit of info! She and Oscar offered Drew their support and they all shared a warm evening together. Kim had just had sex with Julian, but they’d agreed it didn’t have to mean anything. Kim found herself having to face the fact that she seemed to have a thing for men who are emotionally unavailable! 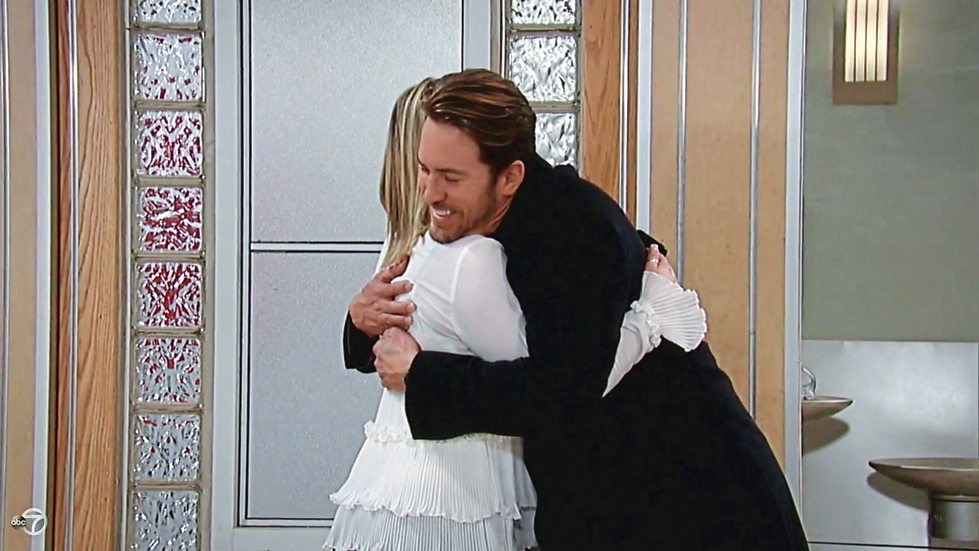 Although it appears in this photo that Peter is leaning on Maxie, the opposite was actually true. (Photo Credit: ABC)

Trying to distance himself from Maxie, Peter suggested she nd support in Nina, but she argued her sister-in-law was a painful reminder of Nathan (who received the Medal Of Valor posthumously). After insisting it was time Maxie moved home, Peter told his publisher all royalties from The Severed Branch should go into a trust for her baby — one that couldn’t be tracked to him. That’s when Nina showed up. With Valentin involved in Ned and Olivia’s campaign to save Port Charles, Nina was hoping to bring Peter and Aurora Publishing on board, as well. After making this pitch to her boss, Nina remained convinced that Peter had something to hide — especially once she and Valentin saw Peter escorting Maxie home! Maxie, meanwhile, was crushed to receive a gift that Nathan had ordered before he passed away. Peter again tried to distance himself from Maxie, this time by taking the blame for Lulu’s Faison story, but the new friends only grew closer.

Lulu begged Spinelli to help her win back her bestie and he was game, but Nina warned Maxie might not be ready. When Spinelli brought Georgie to Maxie’s, he was surprised to find Peter there. He’d spent the night on the couch and while Maxie was grateful, Spinelli reminded her that she had other friends looking out for her. She countered hat Lulu was dead to her and ever yone else was a connection to Nathan — unlike her new friend Peter, who didn’t come with any baggage. Spinelli argued old friends are true friends, but Maxie was having none of it.

Griffin Found Out the Truth!

While Ava was doing her best to make Griffin feel at home, he received the DNA results proving that Peter was Faison’s son. Without giving everything away, he discussed his conflict with Ava, who was confident he would do the right thing. Surprisingly, Ava also did the right thing and put Griff ’s envelope away… only to backtrack, take a peek and see that it was the results of a DNA test! Griff went to tell Anna what he now knew, but got there just as Jason revealed his plan to learn all Henrik knew and then destroy him.

Can Henrik Protect His Identity?

Maxie told Nina she was feeling smothered by her attention, but all her sister-in-law heard was that Maxie was relying too much on Peter. After Nina vented to Griffin, he confronted Peter — who played on the former priest’s empathy and faith by painting a sad picture of growing up as Faison’s son. Claiming he’d fought to become a decent man, Peter argued no one would care about that once they found out who his father was. Meanwhile, with Jason and Anna closing in on Henrik, Lulu was hunting him down for Aurora. After reviewing Peter’s early copy of The Severed Branch, she and Jason determined Henrik had been at GH when Faison died… and that his mother would be his next target. 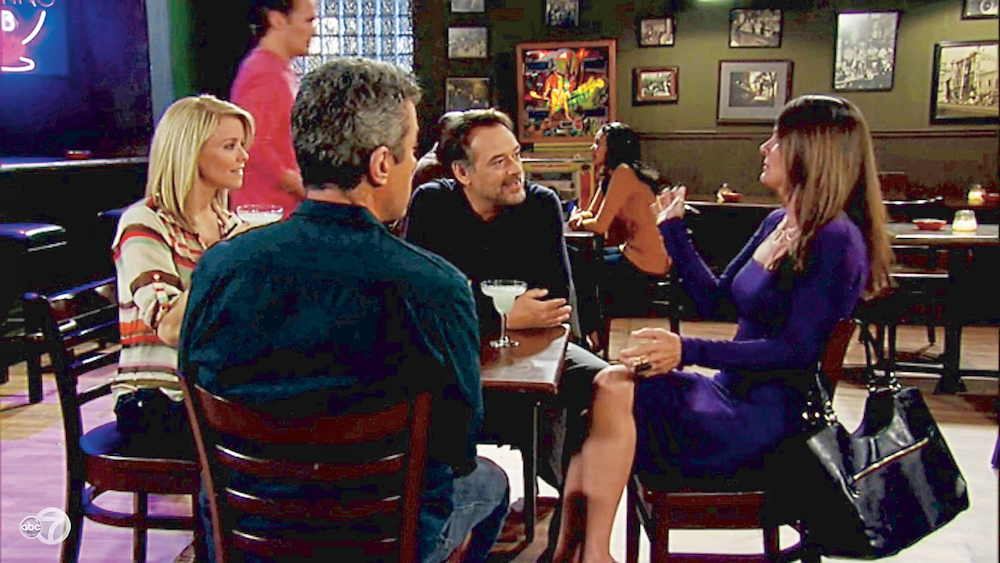 Mac and Felicia felt left out when Kevin and Lucy reflected on her time as a vampire slayer. (Photo Credit: ABC)

There was only so much Andre could do to help Mike, so Sonny, Dante and Michael organized a special meal… which failed to jog his memories. Then the guys recreated Luke’s Club — where Mike wasn’t the only one struck by memories of yesterday! While preparing to return to the stage as Eddie Maine, Ned made peace with Alexis. Even Kevin and Lucy made peace and spent some quality time with their former besties, Mac and Felicia. Bobbie inspired Maxie by reminding her that Nathan would want her to live her life. After Jason and Elizabeth reflected on their own past, he decided it was time for him and Monica to forge a better relationship.

Inspired by his grandfather’s memories at Luke’s, Michael filmed Mike telling stories about his life — both for his own good and posterity. When Mike reverted to childhood, Sonny lost his patience, but Michael was able to talk his grandfather back to the present. Then Mike remembered something about Croton… which really upset Sonny! Nelle, meanwhile, realized that Carly was primed for the next step in her plan and would be at her former home, all alone. 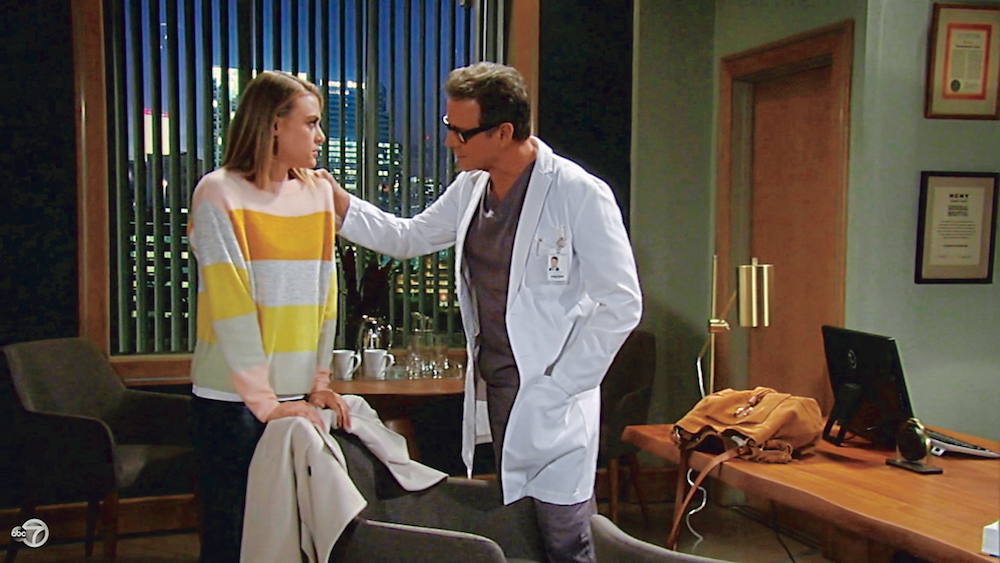 ”Kiki, you can’t become a physician if you aren’t willing to play doctor on occasion!” (Photo Credit: ABC)

Kiki’s concern over Bensch’s interest in her grew, but when her mentor called her to his office again, she agreed to go. Bensch first told her he’d put in a good word for her… and then kissed her! Horrified, she pushed him away and left.

A traumatized Betsy was hospitalized and unable to offer Jordan, Dante or Franco any answers about Harvey. On the upside, after Franco promised Elizabeth he’d keep her in the loop about whatever he learned, she let him come home. Desperate to know why he’d been so terrified of Uncle Jim, Franco agreed to undergo hypnosis with Kevin. Little did he know the villain from his childhood was lurking near Betsy’s room!

Remember B.J. on GH? Here’s What Her Portrayer Has Been Up to Since Leaving the Soap