For a soap called GENERAL HOSPITAL, babies never seem to be born there! Going into labor in the car, Maxie forced Peter to pull over and she gave birth to a baby boy on the side of the road and thankfully there were no complications and her baby was born healthy, if a bit premature. Sadly, Nathan died months ago, and could not be present to welcome his son into the world, but portrayer Ryan Paevey shared some heartfelt words from “beyond the grave” (meaning Twitter!).

“Welcome to the world, little one,” he declared. “It’s a scary place sometimes, and I so wish I could have been there to show you all the good stuff. Your mother loves you and will take care of you and teach you. Watch out for her for me, will ya?” 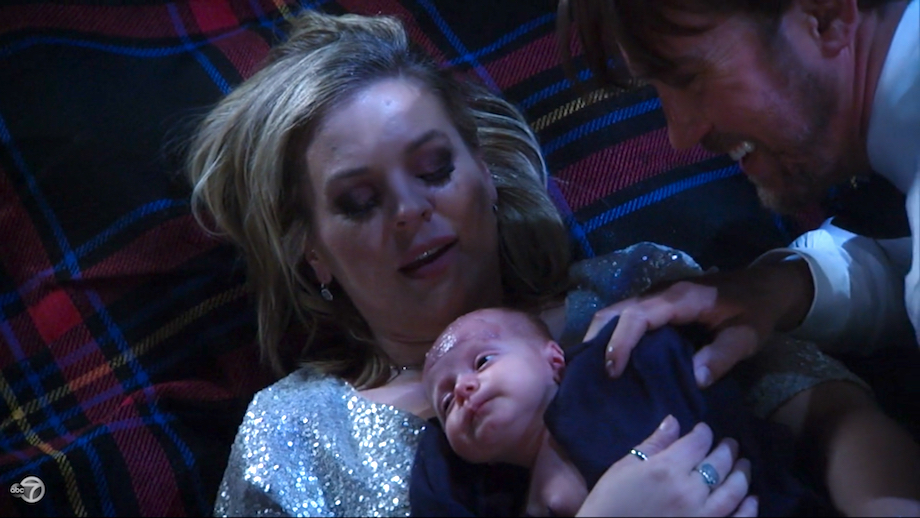 Maxie had no idea that her son was delivered by his uncle! (Photo Credit: ABC)

With their infant son her only link to Nathan, Maxie was understandably upset to not be able to visit her premature baby in the NICU and hold him tight. She appreciated Kim’s effort to set up a webcam and let her see her boy on a tablet screen, but it was a poor substitute for the real thing. Thankfully, he’s doing well and Maxie will soon be able to take him home and teach him all about what a great man his daddy was.

While Kirsten Storms didn’t respond yet to her Paevey’s tweet, GH castmate Risa Dorken (Amy) couldn’t help but be overcome by her former co-stars beautiful message. “This is the best ‘most heartbreaking’ thing ever,” she tweeted. “Love you.”

Since soaps are always bringing people back from the dead, some fans still hold out hope that Nathan will one day return to Port Charles. While he is currently busy pursuing his career — His new Hallmark movie, Marrying Mr. Darcy, premieres on Saturday, June 2 — Paevey had previously said it was possible he could make an appearance on GH. “Who knows what the future may hold?” he posted to Twitter. “At the very least, there’s always dreams, right?”

Why GH Had to Kill Nathan

Kirsten Storms and Her New Boyfriend Look So Happy Together

Why GH Dedicated an Episode to Rick Pessagno

The Stars of GH Say Emotional Goodbyes to Ryan Paevey

Kirsten Storms Signs a New Contract to Stay With GH