It’s a time for endings in these GENERAL HOSPITAL spoilers. Maxie has troubling news to share, Anna justifies her actions, Dante lashes out at Peter, Carly faces her fate, and Nina calls it quits with Valentin. This could get ugly!

Mac and Felicia pay Maxie a visit in the hospital to check on her and her newborn baby boy, but it’s not going to be a completely happy visit. “You guys had better sit down,” Maxie warns. “There’s a whole lot you don’t know.”

After her involvement in luring Faison out of hiding and helping bring about Nathan’s death as well as being duped by Peter while searching for Henrik, Lulu has a lot to make up for. “I’m so sorry,” she tells someone. Who has she chosen to apologize to first?

Robert worries that Anna has made a terrible mistake coming clean to Peter that she is his mother. “The only way I could stop him was to tell the truth,” she insists. And for now she’s safe, because Peter is still being held by the authorities and it’s not going well. In fact, Dante gets all up in his face in the interrogation room as he warns Peter not to try and get on his good side! “Don’t you ever call Nathan your brother again,” the cop orders. 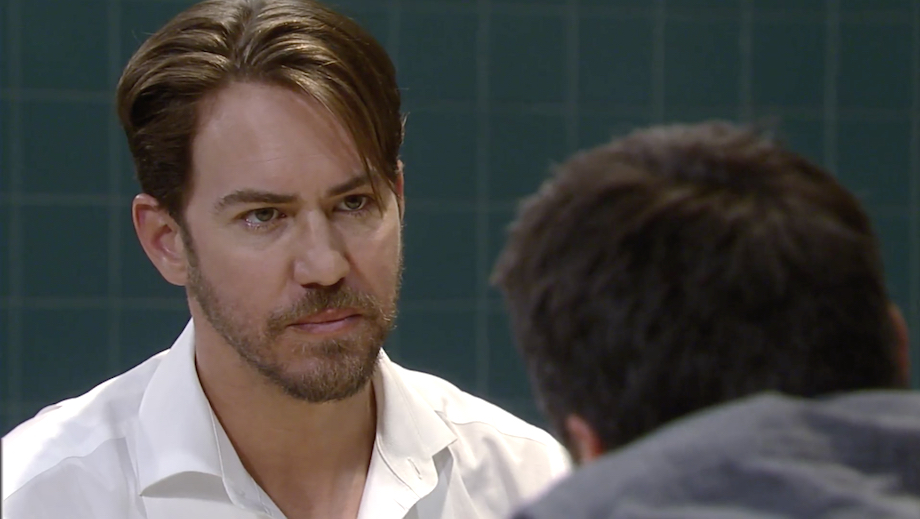 Peter doesn’t have a lot of friends in Port Charles. (Photo Credit: ABC)

It looks like Nelle has finally recovered enough from her fall to be released from the hospital. And it also looks as though she’s keeping up the pretense that she feels terrible about Carly’s apparent mental state. “Poor Carly,” she sighs. Meanwhile, Carly is at the courthouse with Sonny and Diane for her hearing, but doesn’t want to go along with their plan. “I refuse to plead guilty by reason of insanity!” she declares angrily. Can they convince her that’s the best course of action?

After Valentin’s involvement in covering up Peter’s true identity as Henrik Faison was revealed, Nina was absolutely crushed to find that her husband had been lying to her yet again. She already walked out on him, but when he tries to explain and persuade her to come back to him, it may already be too late. “I am done!” Nina cries.

Should Julian Be With Alexis or Kim? — William deVry Speaks Out (EXCLUSIVE)