Just as Carly feared all hope was lost, there’s finally a light at the end of the tunnel for her in these GENERAL HOSPITAL spoilers! And back in Port Charles, Kiki confronts Dr. Bensch, Sam and Curtis think they have a lead on Peter, and Franco begs Liz to open up to him.

Kiki has been feeling more confident now that she’s gone public with her sexual harassment claims against Dr. Bensch. So when he confronts her in the hospital locker room and gets all up in her face, she stands her ground. “Let’s cut the crap, okay?” she protests. But will he back down or has she just made this so much worse for herself?

Alexis has been seeing Kevin for a while, but seems to be getting frustrated at the lack of progress. “So can you please tell me what is wrong with me?” she begs the shrink. Is there anything Kevin can do or say to put her mind at ease? 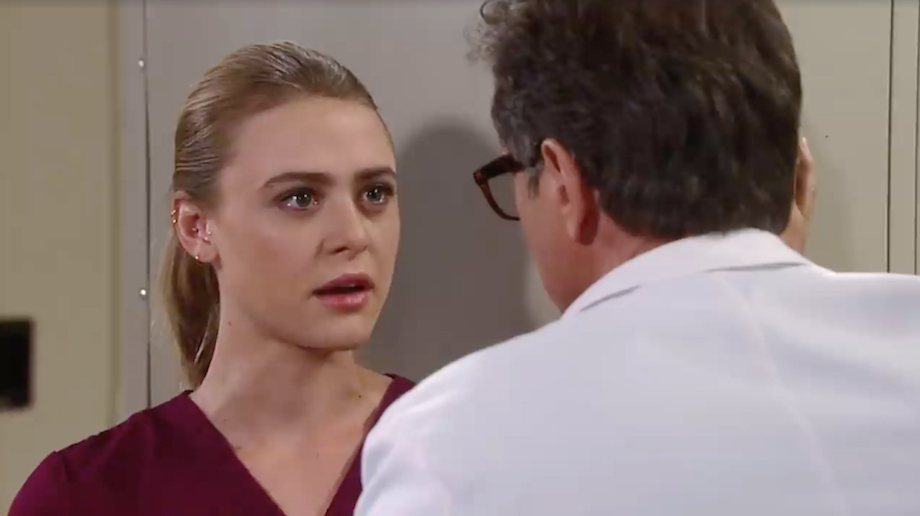 Kiki is through being pushed around! (Photo Credit: ABC)

Having broken into Wyndemere looking for information on Peter’s whereabouts, Sam comes across some papers and shows them to Curtis, believing they may have just found a crucial piece of the puzzle. “Can you think of a better way to get Peter out of the country?” Sam asks her partner. Meanwhile, Valentin isn’t at home because he’s trying to put things right with Nina, who is… well, let’s just say she’s not on the same page! “You betrayed your wife’s trust!” she reminds him. He’s definitely got his work cut out for him!

Franco is excited to be planning his upcoming wedding, but still doesn’t understand why Liz doesn’t seem to feel the same way, especially whenever he brings up her family. “You need to tell me what’s going on with you,” he urges his bride-to-be. Is she finally ready to open up?

As if being locked up in the high security wing of Ferncliff wasn’t bad enough, Carly was force-fed anti-psychotic drugs by an orderly! But even as she’s on the verge of giving up all hope, Carly sees a familiar face that makes her believe she might soon get out and return to her family. “Jason, thank God,” she sighs as she spots her best friend through the window in her cell door. But did Jason take the custodial job at Ferncliff just to keep Carly safe, or is he planning on breaking her out?

See the Awesome Pics from John Stamos’ Return to GH!

Everything You Need to Know About Sarah Webber