Danger is lurking right around the corner in these GENERAL HOSPITAL spoilers, and not everyone is going to be able to escape unscathed! Someone’s watching Maxie, Robert and Dante worry that Anna and Lulu are risking their lives, and Carly may be unable to put a stop to Nelle’s dastardly scheme!

Sitting by Nathan’s grave in the cemetery, Maxie thought she was alone in her grief as she updated her late husband on the latest drama. But a sound of a branch cracking from nearby startles her. “Is someone there?” she calls out. Who’s lurking around spying on Maxie?

Robert is concerned that Anna is getting herself in too deep trying to locate Henrik Faison. “You’re working far too hard to get yourself killed,” he chides her. But it’s unlikely he’ll be able to talk her out of what she’s got planned! Meanwhile, Dante is also worried about his wife getting mixed up in the same dangerous mystery. “You keep hanging around a hornet’s nest,” he warns Lulu, “you’re gonna get stung.” Unfortunately, Lulu’s probably not going to change her mind either! 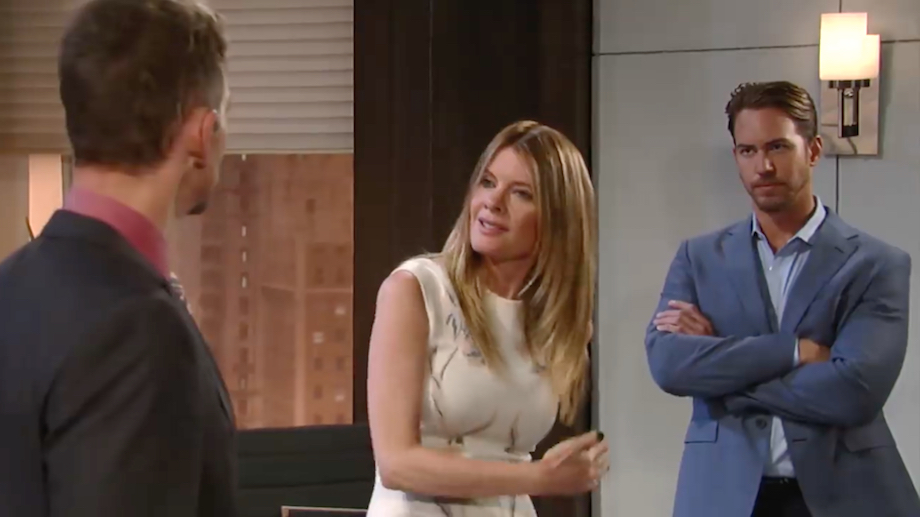 Nina’s not buying what Peter is selling! (Photo Credit: ABC)

After Peter caught Nina snooping through his office, they argue over the file on Nathan she found. And when Valentin arrives and attempts to defuse the situation, Nina won’t be stopped. “My boss,” she announces, “is lying through his teeth.” Can Valentin and Peter find a way to salvage this situation and keep Nina in the dark?

At Kelly’s, Nelle attempts to convince Michael that they can figure something out to ensure everyone is on the same page before the baby arrives. “Your mom and I are just going to have to find a way to make peace,” she suggests. But is that even possible at this point? Because even though Carly remains in the dark about all the terrible things Nelle has done to gaslight her, she’s not blind. “Nelle has an agenda,” she insists to Sonny. But can Carly figure out what it is before it’s too late?

Laura Wright Takes You Along on Her Amazing Emmy Night