There’s trouble brewing in these spoilers from GENERAL HOSPITAL. Olivia is stunned to see Julian again, Michael runs into Nelle, Maxie and Lulu are getting into mischief, and Carly has a warning for Sonny!

At the park, Michael brings Rocco to see Santa, but is surprised to see Nelle working there as an elf. “Anyone that wants to see Santa has to go through me,” she warns the kid, smiling sweetly. Is this part of Nelle trying to show Michael she’s changed, or is she just trying to pay her bills with any job that will hire her? Also in the park, Jordan is lurking behind a Christmas tree as she asks: “Are you ready to do this?” What is she up to?

Olivia is understandably shaken when Julian arrives at the Quartermaine mansion. “What do you want?” she asks nervously. Standing in the foyer with a concerned-looking Alexis and Ned, Julian announces: “I’m here for my son.” Hopefully, he’s just there for a little visit, because there’s no way any judge in their right mind would even consider giving Julian any kind of custody of Leo! 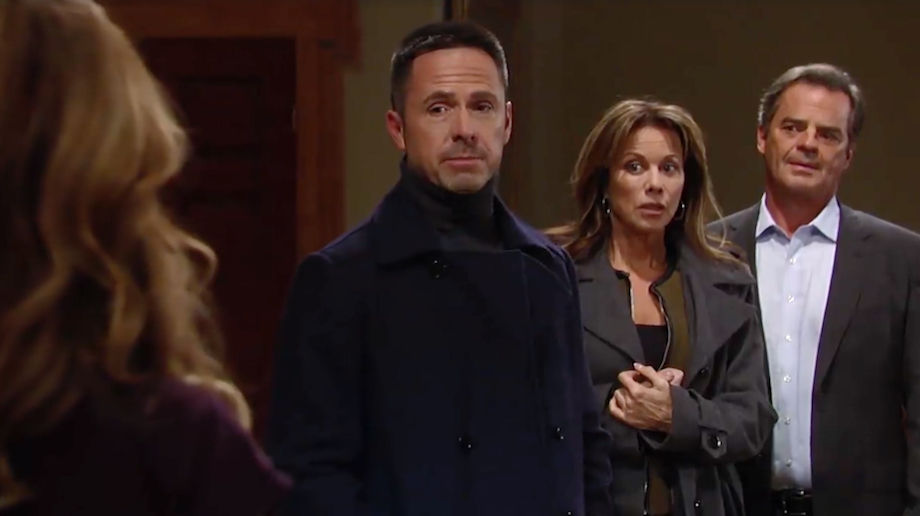 Olivia is not happy to see Julian out of jail! (Photo Credit: ABC)

Having donned their HazMat suits in order to get into the offices of The Invader, Lulu and Maxie begin their search for evidence of who leaked the Man Landers story to the sleazy tabloid. After Lulu snaps a pic of a document with her phone, she tells her partner in crime: “Let’s move.” However, at the police station, Nathan shakes his head as he approaches the prison bars to speak with the prisoner. “Tell me what the hell you were thinking,” he sighs. Did the ladies get caught red-handed, or might he be talking to another criminal?

Over at the Corinthos compound, Sonny appears to be of the mind that now that Jason and Andrew have been identified, things can finally get back to normal. But Carly warns him not to get too comfortable. “Come on, Sonny,” she cautions. “Nothing is settled!”