Carly refuses to let Michael marry Nelle in these GENERAL HOSPITAL spoilers, but can he convince his mother to let him go through with his plan? And while all that excitement is going on, Ava’s world begins to implode around her. Plus, there’s news on Brad and Lucas’ baby and Drew and Sam have some explaining to do!

Having left the wedding ceremony, Lucas is back at work at the hospital when Brad approaches. “I came here with news about the baby,” he announces. But is it good news or bad news? Will their dreams of adoption come true?

With the wedding ceremony in chaos, Sam and Drew take Mike home to keep him from getting any more confused than he already is. But once there, he turns to Drew and casually asks, “How did you and Sam meet?” How in the world are they going to explain that one to poor Mike? 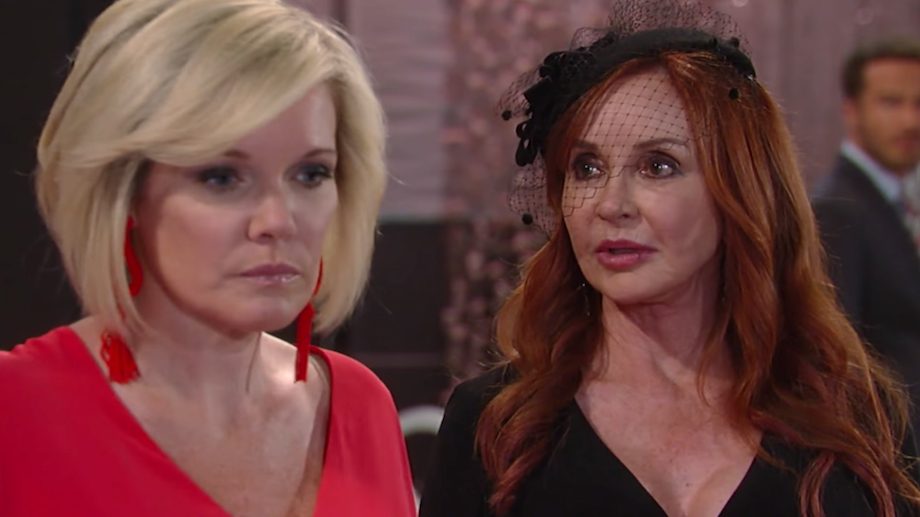 Ava may not be able to wriggle out of this one! (Photo Credit: ABC)

At the Metro Court, with the ceremony on hold, Griffin decides to take the opportunity to question Ava about her recent behavior. “It kinda seems like you’ve been trying to avoid me,” he remarks. And as Nelle is in danger of having her evil schemes exposed, Ava’s role in them could also come to light! “This will come back to bite you, Ava,” Bobbie warns her.

When Ned asked if anyone objected to the union of Michael and Nelle, Carly burst in on cue to insist that the wedding absolutely cannot happen. (Unfortunately, nobody clued her into the fact that this is all a big scam to trap Nelle!) Since she’s supposed to be in Ferncliff, it’s Chase’s duty to apprehend her, but Sonny asks him for lenience. “Anything I do to skirt procedure will only make it worse,” the detective reminds him. And at the altar, Carly tries to get Michael to understand his very life is in jeopardy! “Nelle is not only dangerous,” she warns, “she is deadly. You cannot marry her!”

Don’t miss this tease for today’s thrilling episode, and for more GH previews, keep reading the CBS edition of Soaps In Depth magazine!

Derk and Drew Cheetwood’s Mother Is in the Hospital