Faison’s reign of terror continues in these GENERAL HOSPITAL spoilers, but even as Nathan and the authorities race to stop him, there’s plenty of other drama going on in Port Charles! Kiki gets some good news as Franco broods, and Amy has news for Maxie. But will it be good news?

Griffin has been supporting Kiki’s medical career, and it looks like he just did something wonderful for the young woman because right there in the hospital corridor she flies into his arms to give him a big hug! “Thank you!” she cries. “Thank you so much!” If Ava had seen that hug, she might have gotten jealous again, but she’s a little busy elsewhere in the hospital where she’s encountered Franco in his art therapy room. Seeing his sour mood, Ava wonders, “What’s got you in such a snit?”

Franco is cranky because he’s still keeping secrets about his past with Drew from Liz, even as they prepare to tie the knot. And Liz, who is unaware of the truth, may be making things worse when she tries to help Kevin with a suggestion. “I know the perfect subject,” she declares. Is she sending him towards Franco and his mysterious past? 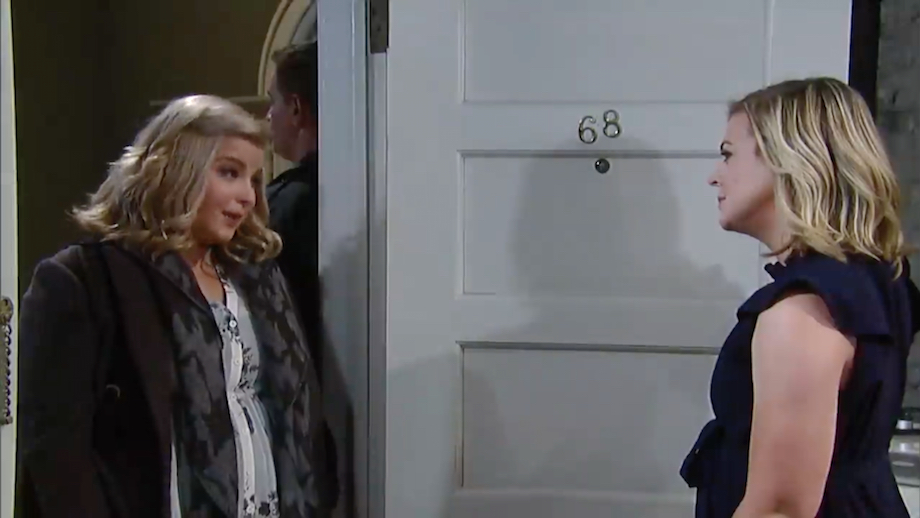 Maxie isn’t exactly thrilled to open her door and find Amy standing there, but the nurse insists she has a good reason for the visit. “Can I come in?” Amy asks. “I have news about your baby.” Maxie’s face turns concerned as she wonders what was could be so important Amy would come over to deliver the news personally.

Nathan left Maxie after their sonogram appointment because he’d been paged to the police station to return to work. There, he finds Dante with Peter, who makes a request of the officers. “The only way I can do that,” Nathan responds, “is to find Faison and lock him up for good.”

Meanwhile, after leaving Lulu and Obrecht in a death trap, Faison has Finn handcuffed to the banister at Anna’s house! The spy has come home with her gun drawn to find the villain pointing his own weapon at Finn! “Drop your gun,” Faison growls, “or I’ll blow the head off your lovely.” Will Anna risk Finn’s life to take Faison out, or will she have no choice but to go along with the madman’s demands?

Who Is Cesar Faison and Why Is Everyone so Scared of Him?

Genie Francis Speaks Out About Her Status With GH