Everyone is terrified that Faison is back in Port Charles, and in these GENERAL HOSPITAL spoilers, terror strikes! But as guns are fired and bodies are rushed into the emergency room, who will find themselves in danger, and which lives will be lost? And is Faison really the one behind it all?

The revelation that Nathan is the son of the legendary villain Cesar Faison caused quite a stir. But things got even worse when Lulu printed her story about the relationship and Maxie feared it could bring the villain back to town. And meanwhile, believing Faison to be behind Jason’s disappearance and Drew’s memory wipe, Sonny and Jason are attempting to lure the psycho out of hiding themselves. Unfortunately, they may just have succeeded!

In the thrilling new trailer for the coming week of GH episodes, Dante bursts into a room with his gun drawn (and Sonny standing behind him), Nathan is on his cell phone begging someone to pick up. “Come on, come on, come on,” he pleads. And then someone has a gun shoved into their side! As paramedics race a body on a gurney through the hospital to the emergency room, Finn runs right alongside it, and Bobbie can be seen watching nervously! 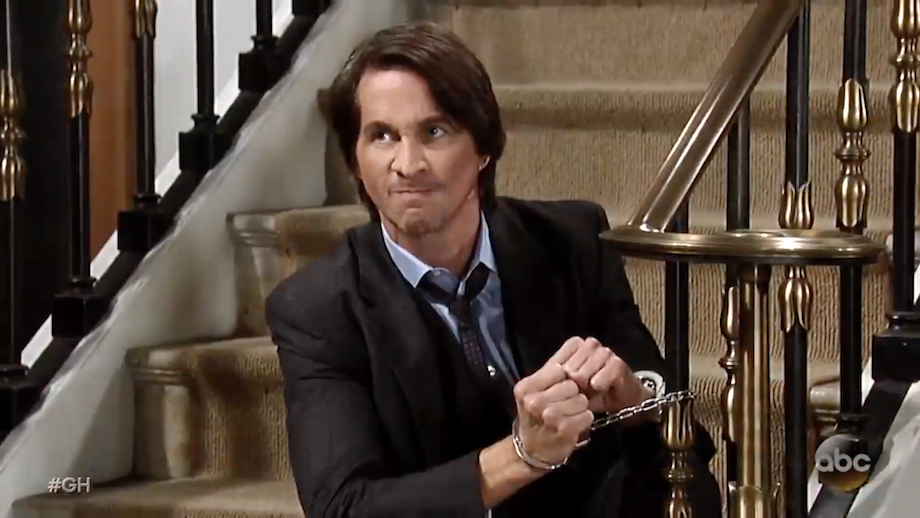 But in another shot, Fin is seen chained to the metal railing of a staircase and unable to escape! Lulu also finds herself trapped, banging on a door and yelling: “Is anybody out there?!” But as she tries to call for help, someone grabs her from behind! Peter looks scared, Nathan looks nervous, and we hear Maxie’s voice gasp: “Oh my God.” A gunshot rings out, but who takes the bullet?

Don’t miss this tease for the exciting week to come, and for more GH previews, keep reading the ABC edition of Soaps In Depth magazine!

Fans Rally to Keep Genie Francis on Contract at GH

Bryan Craig Promises Another GH Return “Is Not Impossible”

Who Is Andrew Cain, Really?