Ava may have said she turned over a new leaf after surviving her horrific burns, but in these GENERAL HOSPITAL spoilers, her actions to keep her daughter close to her could end up costing her the man she loves! Will Griffin be able to deal with the lies she’s been telling or will this be the end of their relationship?

After Avery was found with Mike, Ava immediately insisted on taking custody of her daughter from Sonny to protect her. And now she’s working overtime to make sure that the little girl stays with her. “Avery’s going to be spending a lot more time with her mama,” Ava confides to Griffin as they sit at the counter at Kelly’s. Griffin is surprised to hear this news, and wonders how she possibly convinced Sonny to go along with that. 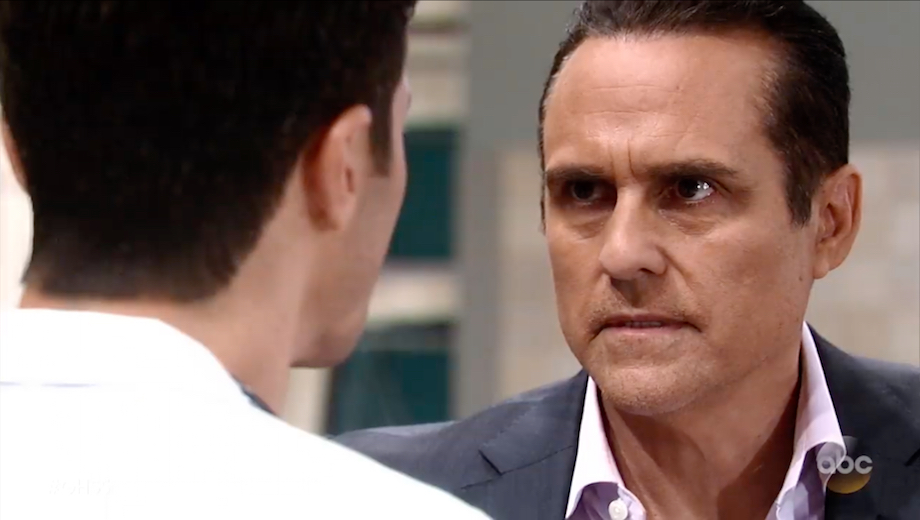 Sonny is happy that Griffin is finally realizing the awful truth about Ava! (Photo Credit: ABC)

Griffin stood by Ava throughout her ordeal as she healed from the burns she received in the fire, and she seems to have made an effort to be the better woman that he deserves. But it looks like the former priest is starting to open his eyes to the truth, especially after a conversation with Sonny in the halls of GH. “You’re starting to see Ava for who she is,” Sonny warns the doc.

As he puts the pieces from both sides of this custody battle together, Griffin is starting to realize that nothing is as it seems — or at least as Ava has told him! And when he finally confronts Ava at her art gallery, things could get ugly! “Why didn’t you tell me the truth about the deal you made with Sonny?” he demands. Ava’s face falls and she struggles to respond. Will she come clean or just spin another web of lies? Is there anything she can say or do to salvage this relationship?

Don’t miss this tease for the exciting week to come, and for more GH previews, keep reading the ABC edition of Soaps In Depth magazine!

See the Hottest Red Carpet Looks at This Year’s Emmys