Lulu wasn’t the only one wondering, “Is Maxie pregnant?” — GENERAL HOSPITAL fans had their suspicions as well! And in the Nov. 22 episode of GH, it was finally revealed that Maxie and Nathan are expecting their first child together!

Lulu suspected as much and was the one who urged her friend to take a pregnancy test the week before, but after learning the results, Maxie played it close to the vest, refusing to divulge the truth to anyone as she grappled with the news herself. But at Thanksgiving with Dante and Lulu, she confided to her friend that she couldn’t tell her until she told Nathan first. (Which naturally made Lulu assume that she was pregnant because otherwise, why would you say that?) Unfortunately, the big reveal didn’t come off particularly well as Maxie got nauseous as the food was dished out and fell over on the table knocking everything to the floor! Afterwards, as Nathan tended to his ailing wife, she revealed to him that she wasn’t sick — just carrying his baby! 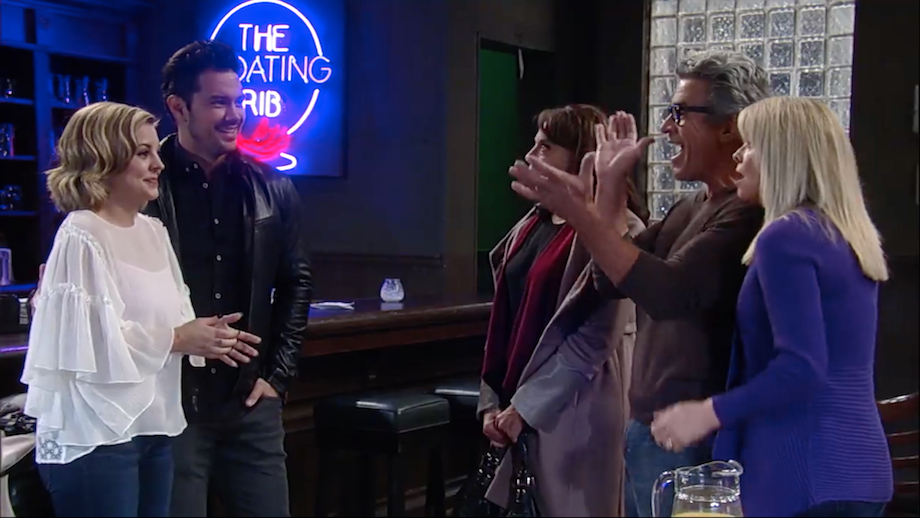 Maxie and Nathan broke the news to their delighted family! (Photo Credit: ABC)

On Nov. 29, Maxie and Nathan gathered their parents at The Floating Rib to drop the news that they were pregnant (well, technically, Maxie is, but you know what we mean) and everyone was delighted! Although when Obrecht reminded Mac that this means they’ll be bonded together forever by their grandchild, he immediately wanted to hit the bottle! It also brought up some issues for Nathan, who was happy his child would know their father since he never knew his own.

This will be Nathan’s first child, but Maxie’s second. Back in 2013, she gave birth to her daughter, Georgie. At the time, Maxie was supposed to be acting as a surrogate for Dante and Lulu, but after miscarrying their baby, she slept with Spinelli and got pregnant with his, which led to all kinds of complications and ugly custody battles after the child’s birth. (In the end, Spinelli and Maxie share custody, but Georgie lives with her Daddie and Ellie in Portland.) Thankfully, there will be no such drama for Baby West! (Although given that in Port Charles, no one ever seems to have babies safely in the hospital, there’s sure to be all kinds of drama surrounding the pregnancy and birth!)

Stay tuned as Maxie’s pregnancy continues and she and Nathan prepare to be parents. And for more GH news, keep reading the ABC edition of Soaps In Depth magazine!