Things are getting out of control in these GENERAL HOSPITAL spoilers, so buckle in because it’s going to be a bumpy ride! Peter holds Drew’s memories as a bargaining chip, but someone may take him out before he can do anything with them, Carly is locked up behind bars with no way out, and Kiki finally reveals Dr. Bensch’s abhorrent behavior! But is it too late?

From his cell in the PCPD, Peter still believes he holds a get out of jail free card — the flash drive containing Drew’s real past. And when Drew pays him a visit, Peter tries to strike a bargain. “I have a copy of your memories,” he reveals. “For a price.” But just how much will Drew have to pay? And later, it looks like Peter’s going to have to pay a serious price of his own when someone sneaks up behind him and jabs a syringe into his shoulder blades! He cries out and falls to the ground, unconscious. Just what was in that needle? Does this person want him dead? 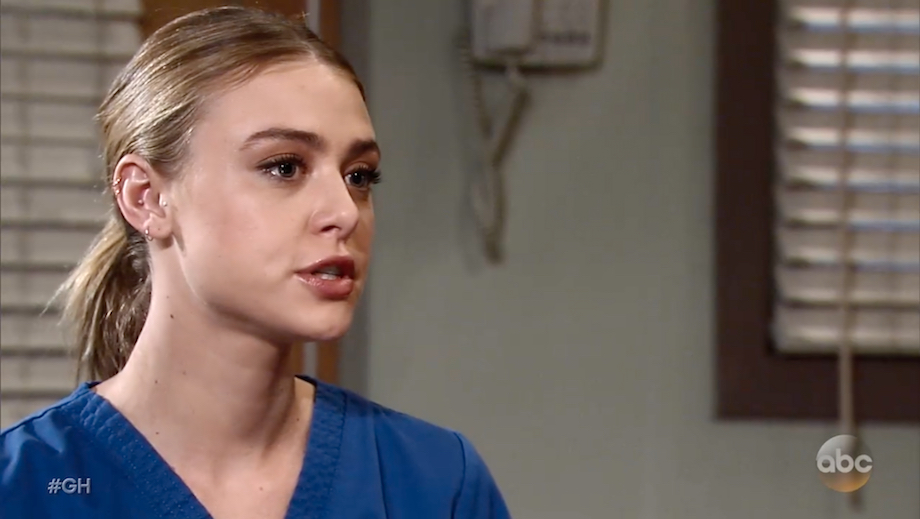 Kiki finally reveals the shocking truth about Dr. Bensch but is it too late? (Photo Credit: ABC)

Sonny visits Carly in prison where she is awaiting trial for pushing a pregnant Nelle down the stairs at the Quartermaine mansion. “I’m going on trial for a crime I did not commit,” she insists to Sonny as he sits on the other side of the glass partition. How much longer will it take before Sonny realizes his wife is telling the truth and this is all an elaborate setup?

Kiki has been doing her best to deal with Dr. Bensch’s unwelcome advances and keep him at arm’s length as she attempts to start her medical career off on the right foot, but it looks like she’s finally reached her breaking point. “Dr. Bensch has been sexually harassing me,” she reports. But is the person she’s telling this to in any position to help her? And when it comes down to her word against his, will Dr. Bensch fight back against her accusations? This could get ugly!