A life hangs in the balance and relationships are tested in these spoilers from GENERAL HOSPITAL! Jason’s been shot, there’s trouble in Morocco, and Maxie is ready to fight for her man!

Monica is horrified to see a bloody Sam sitting in the hospital waiting room and immediately asks what happened. “Jason was shot,” Sam informs her mother-in-law, her voice cracking with emotion. At the police station, Sonny flies into a rage at the thought that his actions could have gotten his best friend killed. Has Sonny’s attempt to get out of the business cost Jason his life?

Nina thought her trip to Morocco was going to be all business, but then she is surprised when Valentin follows her there as a grand romantic gesture. “I will love you always,” he vows. Finally giving in to her feelings, Nina takes his face in her hands and leans in for a passionate kiss! But later, things take an unexpected turn in the exotic location and Nina confronts Nelle. “Everyone’s a suspect,” she warns her employee. “Including you.”

MUST SEE: Brytni Sarpy and Lexi Ainsworth Are Excited About Their New GH Storyline! 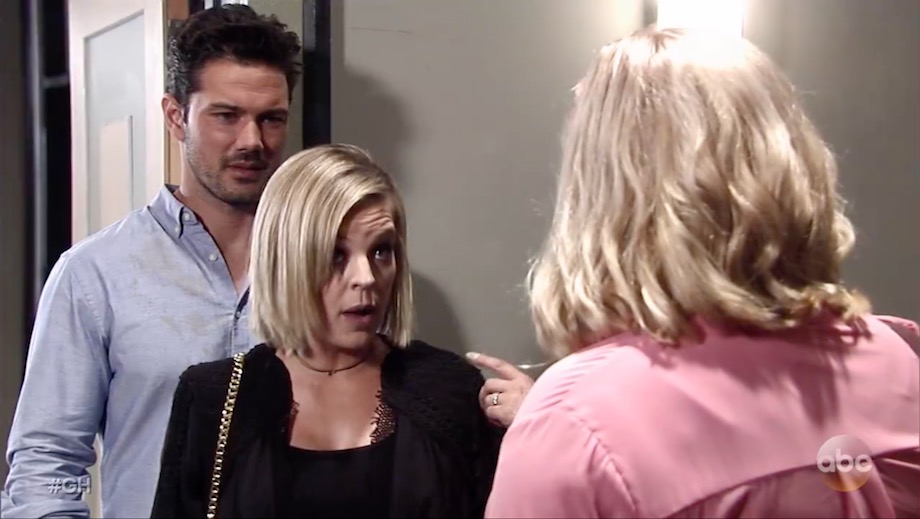 Maxie has a warning for Amy! (Photo Credit: ABC)

Having been warned by Felicia that Nathan was seen heading upstairs to a Metro Court hotel room with Amy, Maxie headed up in time to see them emerge from a room with her husband buttoning his shirt. She already slapped Nathan, and now it’s Amy’s turn! “You want my husband?” Maxie hisses at the nurse before hauling off and smacking her hard across the face! Will Nathan expose the truth about what he and Amy have been doing in order to save his marriage?

The Tweet That Had Fans Convinced Michelle Stafford Is Leaving GH!

Laura Wright Is Crazy About Her Boyfriend