Port Charles continues taking sides in these spoilers from GENERAL HOSPITAL, but only one of the two men can be the real Jason Morgan! But that’s not the only drama going on in town as Alexis worries about Julian and Kiki tries to help her mother.

Having seen how badly Julian was beaten in prison, Alexis was concerned, but then she saw him get roughed up by another inmate right before her eyes! She’s claimed she wants to cut her ex out of her life, so could that be why she’s going to his sister? “It’s about Julian,” she tells Ava. “He’s in trouble.” Does she just want to push this problem off onto Ava, or is she looking for help to save him?

Meanwhile, things are starting to look up for Ava, who was gifted with Dr. Klein’s formulas that could help restore her face. Of course, she can’t do it herself! Kiki leaves her mom to head to the hospital with the flash drive containing Klein’s notes. “I need your help,” she announces to Griffin and Dr. Bensch. Will they be able to use the information to help Ava… and other patients? 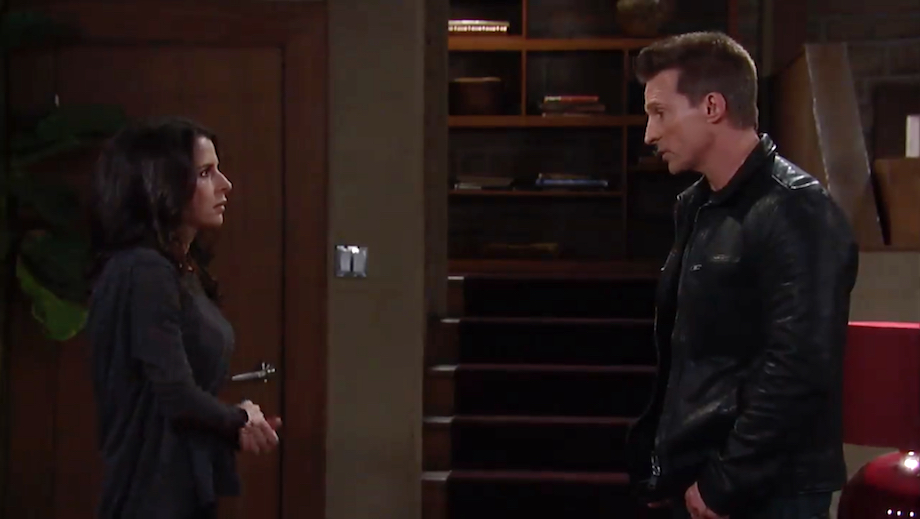 Sam is caught between her feelings for two Jasons! (Photo Credit: ABC)

Sam has found herself drawn to Patient Six because he has Jason’s original face, but she also has promised her husband that she loves him and the family that they have built together. But when Six pays her a visit at home, will that change? “What matters is that you have two beautiful children,” he tells her. Will Sam change her mind and believe that this man is the real Jason?

Jason has been feeling set adrift since Patient Six made his shocking return to Port Charles, but in the Quartermaine crypt, Monica attempts to reassure him. “You will always be my son,” she insists, giving him a warm hug. But as Jason returns her embrace, it doesn’t appear that even he is convinced that he’s the real Jason Morgan!

The truth could be revealed by the DNA test that both men underwent, and when Jordan arrives at the Corinthos compound, Sonny and Carly are eager to learn the truth about Jason. “Are you saying that you have the results?” Carly asks. “Do you know?!” Will the mystery be solved, or will Jordan’s information only complicate things further?