Family drama rocks Port Charles in these GENERAL HOSPITAL spoilers! As the holidays arrive, Ned tries to get Monica to see sense, Maxie interrupts Kevin and Laura’s wedding, Sam wants to marry Drew again, while Jason is heartbroken by Jake’s reaction to his visit.

Liz comes downstairs to see Franco playing with a Star Wars virtual reality game and shouting: “Score one for the Rebellion!” Hopefully, that was his Christmas present he opened early and not one of the kids’!

Jason’s return from the dead and the revelation that Drew is his twin brother — with a son, Oscar — has Monica excited that there are more Quartermaines to add to the family tree. But Ned worries she may be overreaching and urges her to take a step back. “I’m not turning away anyone who is family,” Monica asserts. Meanwhile, over at Kelly’s, Josslyn gives Oscar a present — a biography of Edward Quartermaine. As Oscar looks quizzically at the book, Joss excitedly reminds him the man is his great-grandfather. But does Oscar actually want to be a Quartermaine? 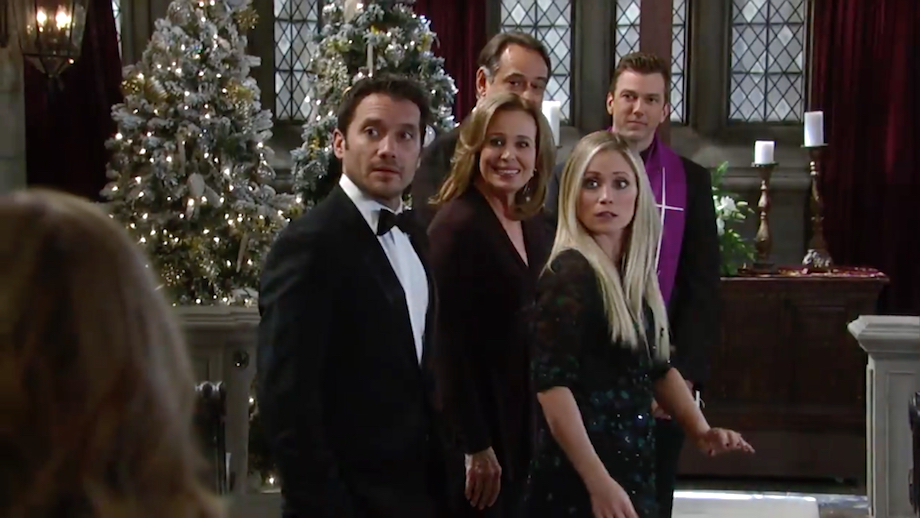 At the church, Dante and Lulu are there to stand up for Kevin and Laura as they prepare to tie the knot, but just as things are getting underway, Maxie and Nathan burst in. “There is no way that you can go through with this wedding tonight!” she cries. Is she just blowing things out of proportion, or is there a real reason why Laura and Kevin can’t be married on Christmas?

Despite Jason’s return, Sam has made no secret of her desire to remain committed to Drew, even going so far as to ask him to marry her since their marriage is technically invalid. And now as Drew gets on his knee in front of her, Sam holds out her left hand and smiles nervously. “You can put that ring on my finger!” she urges him. But is Drew ready for this commitment when he doesn’t even know who he is yet? And is Sam rushing this to cover her own conflicted feelings for both Drew and Jason?

Jason pays a visit to Liz’s home with Christmas presents, but his heart breaks as Jake responds badly to his presence. “I don’t want you here,” the boy declares. As Jason stands there with a gift-wrapped box in his hands, Liz cringes beside him. Can they get Jake to accept that his father has come back to him?