Port Charles was still reeling from the devastating earthquake when an aftershock hit, so in these GENERAL HOSPITAL spoilers, the danger is definitely not over yet! Ned steps up as mayor during the crisis, Alexis worries about her daughters, and Dante, Drew, Sam, and Jason all find themselves in life-or-death situations!

With Olivia by his side, Ned takes action as the new mayor of Port Charles. “This city is in chaos,” he declares to Jordan. “People are hurting.” But is Ned really ready to take charge at this time or is he in way over his head?

Julian rushes into the hospital with an unconscious Molly in his arms and a worried T.J. trailing behind him. “We need some help here!” Julian calls out. What happened to Molly and how severe are her injuries? Finn makes a call to report: “They just brought Molly in.” It’s likely he’s calling Alexis, who we see worrying. “I haven’t heard from either of my daughters,” she sighs. Thankfully Kristina is safe in Oregon! 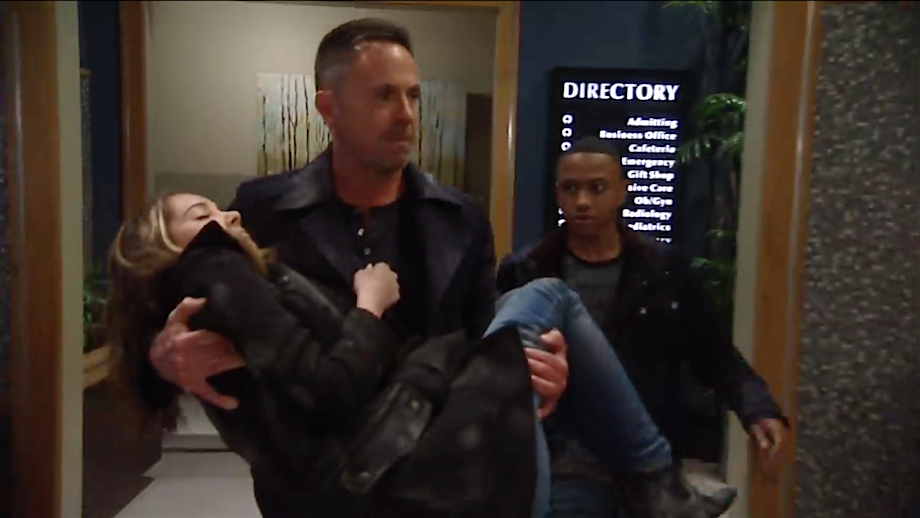 In the Floating Rib freezer, Dante cowers on the floor as Drew takes cover in the doorway while a lighting fixture breaks off of the ceiling and a live wire sends dangerous sparks flying all around them! Thankfully they were able to get Joss and Oscar to safety, although the young man is still in a bad way as he is wheeled into the hospital on a gurney. As Josslyn tearfully asks if Oscar is okay, Kim orders her away. “I need you to stand back!” the doctor warns.

Still stuck in the trailer at the construction site when the aftershock struck, Sam and Jason find themselves in a terrifying crisis! As the trailer rocks from side to side, they both brace themselves against whatever they can find. “If I move any more,” Sam cries, “this trailer is gonna go!” Can Jason rescue them both?

Don’t miss this tease for today’s thrilling episode, and for more GH spoilers, keep reading the ABC edition of Soaps In Depth magazine!