It’s time for some tough talk in these spoilers from GENERAL HOSPITAL! Nathan and Monica each take a stand, Ned and Griffin are worried about their futures, and Sonny and Jason are thisclose to coming face to face with the mysterious Patient Six!

“Ask Man Landers” has been pretty successful, but it’s turned Nathan’s life upside down, and he’s more than ready for it to be over. “I think it’s time you shut down the blog,” he urges Amy. But is the nurse really ready to give up on her dream — especially since it’s helping to pay for her brother’s medical expenses?

Elsewhere at the hospital, Olivia has a run-in with Monica, who wants to discuss her new role in the Quartermaine family. “It’s way past time we had a chat about boundaries,” Monica declares. Meanwhile, Ned is in Michael’s office wondering if he still has a future in the family business. “Did you change your mind about bringing me back to ELQ?” Ned asks, concerned. 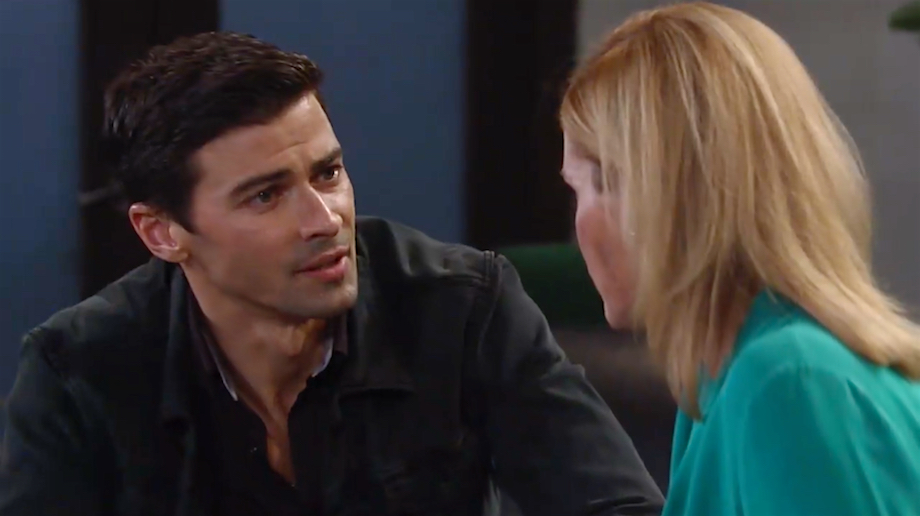 Is this a new beginning for Griffin and Ava… or the end? (Photo Credit: ABC)

Ava was shaken when Griffin arrived at her apartment to declare that he had left the priesthood and wondered what that means for the future of their relationship. Of course, neither of them seem to really know what kind of a relationship they have yet! “I want nothing more than to kiss you,” Griffin announces. But since he’s saying it instead of doing it, could he be having second thoughts about them?

Maxie pays Sam a visit to ask for a little quid pro quo. “I’m doing you a favor,” she reminds the former PI. “I need you to do one for me.” But what, exactly, does Maxie want from Sam? Meanwhile, Jason has tagged along with Sonny on his trip to the bridge to meet with the person who’d written him, but they don’t find anyone. “Whoever sent that note,” Jason remarks, “must’ve reconsidered.” But Patient Six is hiding in the bushes nearby, just out of sight. Will he make himself known, or has Jason turning up scared Six away from trying to talk to Sonny?

Steve Burton Reunites With Kelly Monaco at GH: “We’re Picking up Where We Left Off”

Yes, That Was Gopher From THE LOVE BOAT Playing a Priest on GH!

Kelly Monaco and Billy Miller are Excited About Their Upcoming Storyline