Port Charles is ready to explode this week in these GENERAL HOSPITAL spoilers! Griffin confronts Peter with the truth, Nelle begins her plan to destroy Carly, and Liz and Jake find themselves in some serious danger!

Griffin was shocked to get the test results that proved his suspicions that Peter August was really Henrik Faison, but wasn’t sure exactly what to do with the news. And while Anna would likely appreciate knowing that the son she’s been looking for is closer than she realizes, Griffin goes to the source, first. “You are the son of Cesar Faison!” the doc yells at Peter. Now that the secret is out, how far will Peter go to keep Griffin quiet?

Nelle is ready to take her plan to gaslight Carly to the next level and has her rival’s home wired so that when the young woman uses an app on her phone, the lights in the house flicker and go out on her command. “Let the haunting begin,” Nelle smiles to herself. And as Carly explores her dark home with the flashlight on her phone, she discovers Morgan’s clothes hanging in her closet and is startled by something behind her! What else does Nelle have planned to drive Carly crazy with memories of her late son? 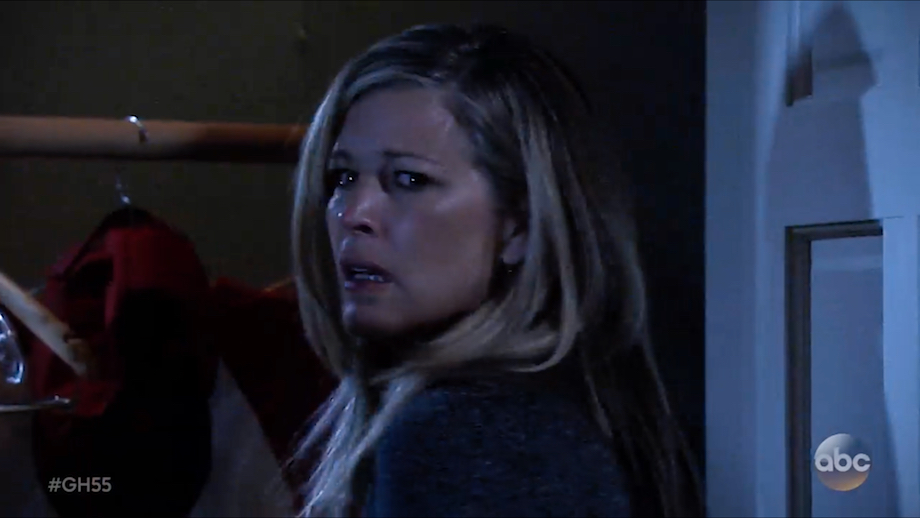 In the parking garage at the hospital, Liz is startled when someone jams a gun into her back! “Do as I say and you and your boy won’t get hurt,” Jim Harvey hisses. As a terrified Jake looks on, Liz must decide what to do. Will she fight back and risk her life and that of her son, or go along with Harvey’s demands and hope someone comes to their rescue? Just how desperate is Harvey to cover his tracks with Franco and Drew?