Relationships are in flux in these spoilers from GENERAL HOSPITAL. As Finn’s seems to be ending, something seems to be starting between Griffin and Ava. And the reunions of two other couples couldn’t be more different!

Ava got quite an eyeful when Griffin took off his shirt so she could tend to his bug bite, but given the current state of her appearance, the burn victim doesn’t feel like any man would want her right now. “Who says I’m not tempted?” Griffin says gently. Could something real be developing between these two?

In the park, Kristina and Parker reunite to watch the concert and catch up. “Don’t you think I’m entitled to know how it all worked out?” Kristina asks her ex-lover. How much with Parker confide about what happened since they split, and might she want to get back together with Kristina? 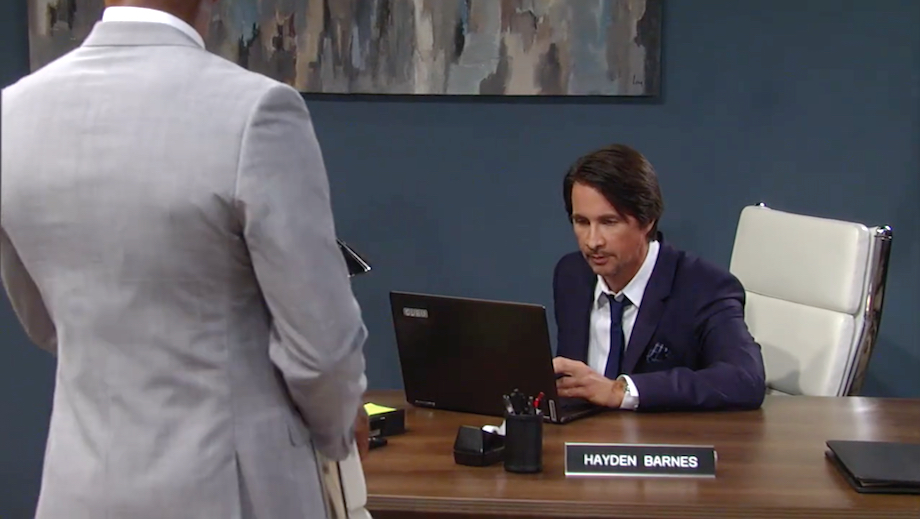 After Hayden disappeared on their wedding day, Finn took off as well, and Curtis finally manages to track his friend down in Hayden’s office where Finn is digging through her computer for clues as to why she ran away and where she went. “Why did you find me?” Finn asks angrily, not even looking up from the laptop. With a grim face, Curtis replies: “To stop you from chasing Hayden.” Meanwhile, Jared confronts Obrecht because her plan to have him blackmail Hayden didn’t work out. “My ex-wife screwed me over,” he barks. “Again!” Will he take his frustrations out on his partner in crime?

Outside of Kelly’s, Liz is overjoyed to encounter a familiar face she hasn’t seen in quite some time. “Franco!” she cries, flying into his arms. Franco smiles and envelops her in a warm embrace as they kiss passionately. Can these two pick up right where they left off?

Don’t miss this tease from today’s emotional episode, and for more GH previews, keep reading the ABC edition of Soaps In Depth magazine!

What Happened to Hayden on GH?