In these GENERAL HOSPITAL spoilers, it’s final hours of the Nurses Ball where an unexpected act takes the stage, Robert attacks Valentin, Anna goes on a wild goose chase, and Maxie goes into labor! You will not want to miss the grand finale and all the drama that comes along with it!

Kiki is startled when someone enters her dressing room while she’s not fully dressed, and more upset when she turns to see that it’s Dr. Bensch. “What are you doing here?” she demands to know, covering herself. Just how far is he going to go?

Everyone was startled when Robert appeared at the end of Valentin’s Nurses Ball performance and slugged him! Now he holds the cuffed Cassadine up against the wall with his forearm against his throat and a gun in his ribs declaring: “I want justice!” Can Valentin talk his way out of this one or is the jig finally up? 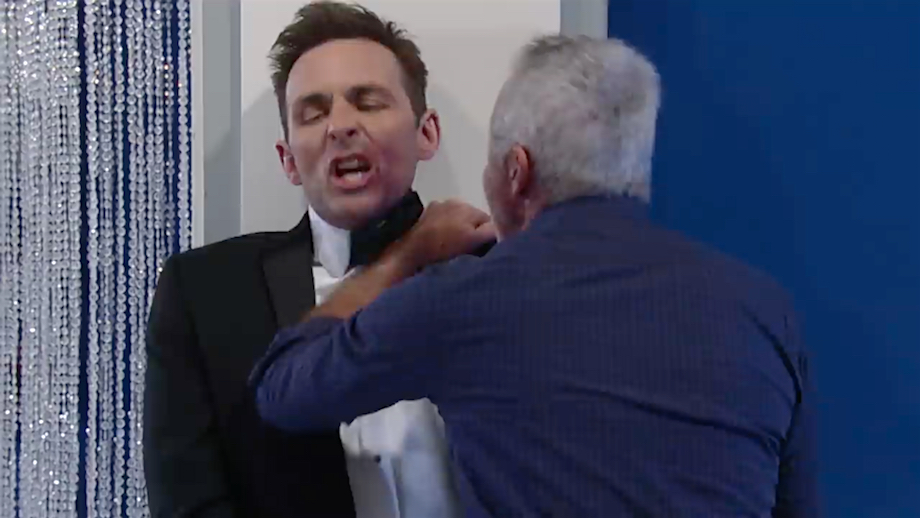 Will Valentin weasel his way out of this? (Photo Credit: ABC)

As Ava takes the stage for her big number, Sonny tries to not let it get to him. “The night is too important to let Ava ruin it,” he insists. What does Ava have up her sleeve this time?

Having realized that Peter is Henrik Faison, Jason and Sam race to locate him before something horrible happens. Spinelli helps them by hacking his E-mail and discovers a message to Henrik from his mother. Meanwhile, having set up the meeting with Henrik, Anna ditched the Nurses Ball and waits nervously on the docks for her son to arrive. “Where are you?” she wonders.

Everyone may be looking for Peter, but he’s a little busy right now helping to deliver Maxie’s baby! He was driving her home from the ball when her water broke and she went into labor. She insists that he pull over to the side of the road because there was no time to get to the hospital. As Maxie lays on a blanket in the grass, she screams in pain as the contractions hit. Is Peter really ready to bring his niece or nephew into the world?