The best-laid plans are starting to fall apart in these spoilers from GENERAL HOSPITAL! Finn refuses to help Anna anymore, Michael and Nelle’s relationship could be about to hit yet another snag, and the Man Landers book launch party could be a hot ticket!

Anna insists on Finn helping her get information about of Cassandra, but he’s really not interested and decides to call her bluff. “If you want to make good on your blackmail threat,” he warns, “go right ahead!” But will she really expose his secret just because he refuses to help her dig up dirt on Valentin? 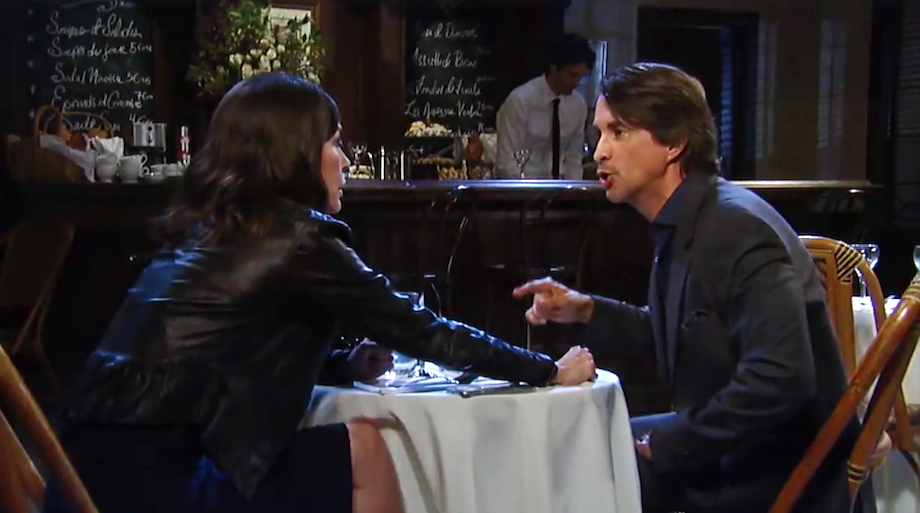 Finn finally stands up to Anna! (Even though they’re sitting down…) (Photo Credit: ABC)

Nelle was shocked when Michael bought her apartment so she wouldn’t be evicted, but insisted on paying him rent because she didn’t want people to think she was taking advantage of him. But now Michael worries that his generous efforts may have gone to waste after all. “What’s wrong?” he asks her. “You having second thoughts?” Meanwhile, over at Kelly’s, Carly plans to find out the truth about Nelle from her late fiancé’s sister. “After today, I will know whether I can keep my promise to Michael,” Carly informs Bobbie. Because if Carly learns something truly terrible about Nelle, there’s no way she’s going to be able to let her son be her next victim!

At the Metro Court, Quinn is setting up for the Ask Man Landers book launch party. “I’m about to make Nathan West the next big thing!” she promises. But Nina just smiles awkwardly as she glances at Amy. What will happen if the truth comes out that Nathan didn’t write the book, and it was all Amy’s doing? Meanwhile, Maxie has a plan to keep Nathan from being exposed that can save his career (and keep Amy from losing the money to help her ailing brother), but Spinelli arrives at her apartment and he might be carrying a monkey wrench to throw into the works! “I’m here because of Ask Man Landers, he reveals. Can Maxie keep everything from falling apart?

Tamara Braun Is Reportedly in Talks to Return to GH!