Michael has been desperate to take down Nelle and get his mother out of Ferncliff, but in these GENERAL HOSPITAL spoilers, it looks as though he’s even willing to make Nelle his wife to see all of that happen! But will he and Chase be able to pull off their risky plan to bring her to justice?

Everyone was more than a little taken aback when Michael announced his intentions to marry Nelle. Especially Carly, who warned Sonny: “She’s going to kill him!” Although Nelle was never found guilty of the death of her fiancé, Zach, everyone around her suspects the schemer had a hand in his “accidental” demise. So Chase hopes to fake Michael’s death as part of a plan to trap Nelle and expose all of her crimes. 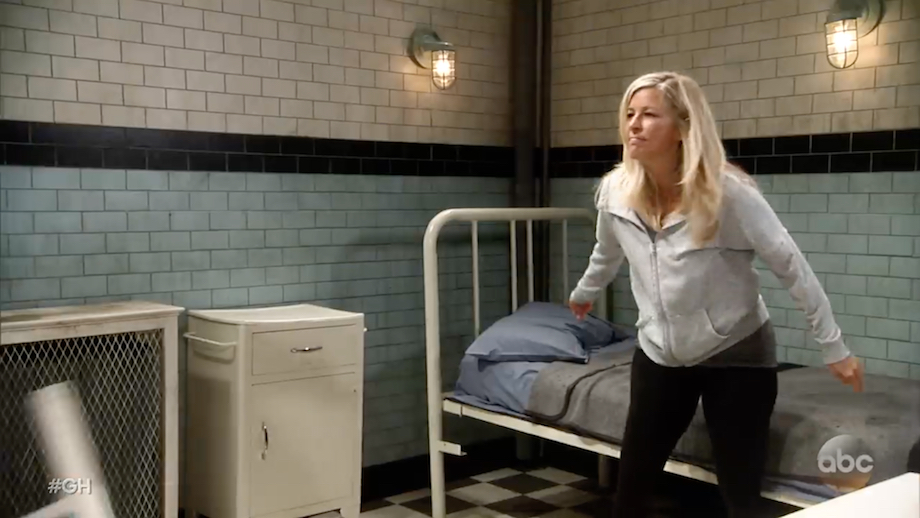 Carly is helpless to do anything to save Michael! (Photo Credit: ABC)

Now, Michael takes steps to make sure that their plan goes off without a hitch. He meets with Alexis and tells her what she needs to know. “After today,” he assures the attorney, “everything changes.” But as he moves their wedding day up, and everyone prepares for the ceremony, Carly is trapped in Ferncliff, heaving a chair at the door in frustration. Josslyn continues to take Nelle’s side, but can she finally be convinced that her friend is evil incarnate?

Dressed in her bridal gown, Nelle walks down the aisle as Jason shoots her the stink eye. Sonny and Mike turn around in their chairs as Michael stands up at the front awaiting his bride. “’Til death do us part,” Nelle declares, her voice chipper. Is she about to fall into their trap or does she still have another card up her sleeve?

Yes, That Was George Hamilton as Colonel Sanders in Port Charles!