The walls are closing in on Nelle in these GENERAL HOSPITAL spoilers! Even as the cops work up a plan, Ava threatens the schemer. Plus, Griffin and Kiki are going to have to be more careful about their secret, and Sonny has a new problem to deal with!

They’ve been through some ups and downs, but it finally looks as though Maxie and Lulu are in a good place again and ready to be friends like before. “Maybe we could help each other out,” Maxie suggests to an eager Lulu. “The way we used to.” What does she have in mind?

In the hospital corridor, Kiki updates Griffin on how Dr. Bensch plans to use the photo of their hug against her in court and worries about what will happen if someone finds out about the night they spent together. Griffin insists that honesty is always the best policy, especially with your attorney. “Telling Alexis is for your benefit!” he urges. At that moment, Alexis walks up and overhears. “Tell me what?” she asks, annoyed. These two really need to find more private places to have these conversations! 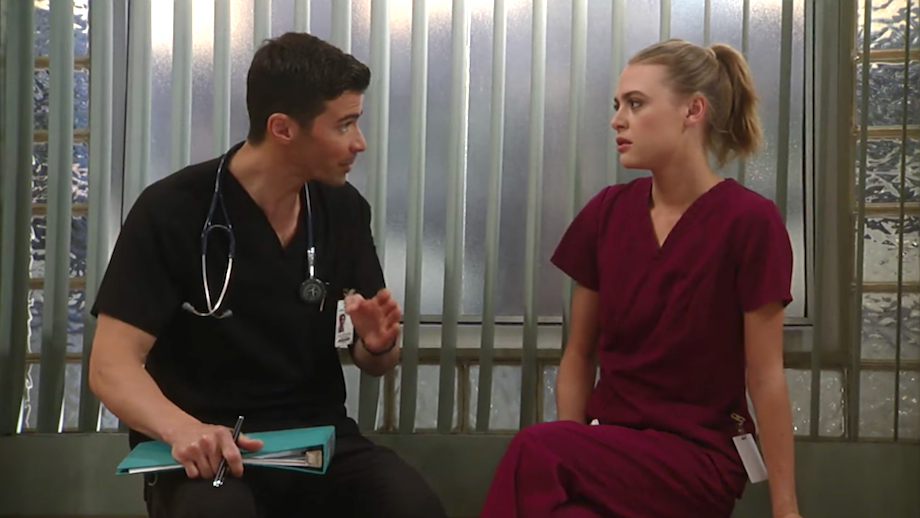 Griffin and Kiki should stop talking about their secrets in public! (Photo Credit: ABC)

Still locked up in the shack, Peter is growing more and more desperate as his situation looks more and more hopeless with each passing day. And when the young scout returns for another visit, Peter is crushed to learn he’s no help at all. “Didn’t you tell anyone I was here?” he cries.

Having learned from his father that Mike dug up the body buried in Croton and moved it to Port Charles, Sonny realizes he’s going to have to make sure nobody ever stumbles across it. “There’s another fire I gotta put out,” he informs Jason. But with Julian preparing to do construction on Charlie’s Pub, Sonny and Jason are going to have to move fast — and carefully!

Ava and Nelle have always had a cat and mouse relationship where the roles change constantly but now it looks like Ava is taking charge and putting the young schemer in her place. “I will defend myself by whatever means necessary,” Ava warns. Meanwhile, in Jordan’s office at the police station, she and Chase bring Michael in on their plan to bring Nelle to justice once and for all. “We have a plan,” Chase explains, “but it involves potential risk to you.” Michael has vowed to save his mother and bring Nelle down, but is he willing to risk his life to do it?

"I will defend myself by whatever means necessary." #GH55 pic.twitter.com/tVixRKgKoY

See How the GH Stars Celebrated the Fourth of July!

Patricia Bethune “Would Love to Stay on” GH as Mary Pat