Lives hang in the balance in these GENERAL HOSPITAL spoilers, and the future is uncertain for many in Port Charles! Peter has escaped from jail, and Jason worries he’ll come after Anna, even as Carly is still stuck behind bars wondering if anyone is making any progress on her case against Nelle. But it looks as though Nelle still has the upper hand!

At the hospital, Nina cradles baby James in her arms and introduces herself to the infant. “I’m your Aunt Nina,” she smiles down at the bundle of joy in her arms. But in Maxie’s room, she sees Peter standing over her. “I had to see you,” he insists. But seeing as how the last we saw of Peter he was stabbed with a syringe and dragged off my a mysterious assailant, this is probably just Maxie’s nightmare! 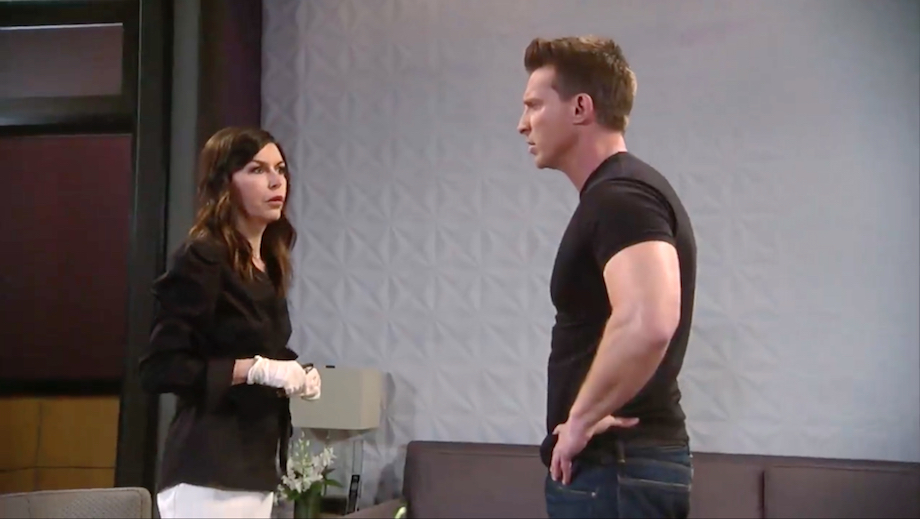 As news of Peter’s jailbreak spreads around Port Charles, reactions are mixed. Robert is appalled when he notices that Anna isn’t upset that her son is free. “You’re HAPPY that Peter escaped,” he notes with a frown. And later, Jason is also concerned about Anna’s reaction to Henrik Faison being on the loose. “Peter already tried to kill you once,” he notes. “What makes you think he’s not gonna try again?” Is Anna deluding herself thinking Peter doesn’t want revenge on her for abandoning him as a child?

Sonny visits Carly in Pentonville and she demands an update. “Is there any progress proving that Nelle set me up?” she asks desperately. Unfortunately, Sonny doesn’t seem to have any good news to share with his wife. And back at the Quartermaine mansion, Nelle takes the opportunity to open up to Michael. “I need to tell you how sorry I am for what I’ve done to Carly,” she confides. Will Michael continue to fall for her manipulations?

If GH Wants to Bring Back Jeff Webber, We’ve Got Some Casting Suggestions