Tensions are building in these GENERAL HOSPITAL spoilers, so brace yourselves for the coming explosion! Sonny is getting frustrated with his father, Liz tries to support Kiki, Peter begs for his life, and Obrecht is out for revenge!

Worried about what really happened to that body he buried years ago, Sonny continues trying to get the details out of Mike, to no avail. “None of this is jogging your memory?” he asks his father. Mike sighs and throws back his head in despair. Will the truth ever come to light?

Julian was startled when Alexis asked him to join her during her therapy sessions to help her get to the bottom of her problems, and isn’t sure whether to do it. “You make your own choices, Charlie,” Kim teases. But it looks as though he eventually agrees to it, because Alexis later remarks: “After everything you’ve put ME through?” and it certainly sounds like she’s referring to Julian! 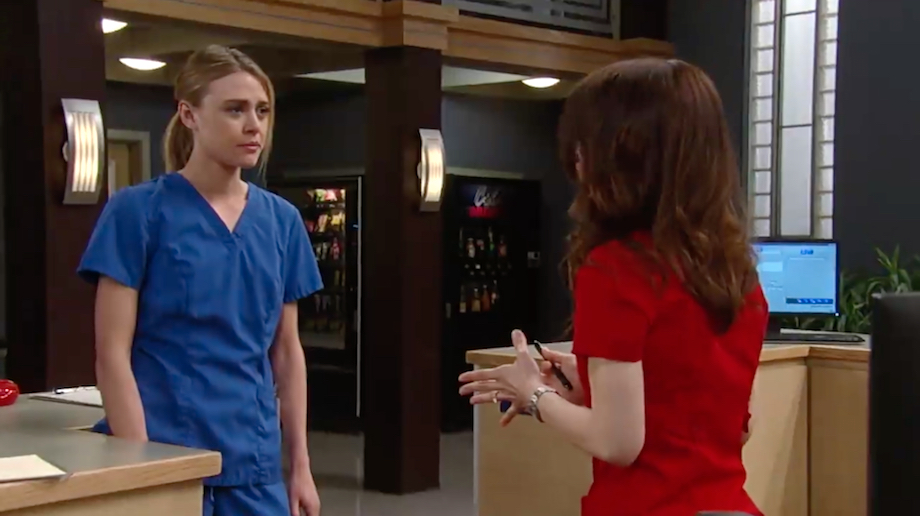 Can Liz keep Kiki from giving up the fight? (Photo Credit: ABC)

Kiki continues to have second thoughts about accusing Dr. Bensch of sexual harassment, but she also continues to get backup from her friends and co-workers. “There’s no way you’re the first person Bensch has done this to,” Liz insists. But can they dig up more victims who are willing to go on the record to bolster Kiki’s claims?

Valentin is confused when Finn shows up and wonders what he’s after. “I was looking for you,” the doctor reveals. But why? Meanwhile, Nina continues trying to take care of Peter as he remains tied up in the shack and he keeps trying to convince her to let him go before Obrecht does something crazy. “You think I deserve to die?!” he cries. And over at The Floating Rib, Obrecht takes a break from torturing Peter to go after another target — Anna! “We still have our own score to settle,” she warns the spy. But what does Obrecht have planned?

"We still have our own score to settle… " #GH55 pic.twitter.com/UpX42TdDVU

Everything You Need to Know About Nurse Francesca on GH