Peter’s true identity has finally been exposed, but in these GENERAL HOSPITAL spoilers, that’s just the beginning of the story! Dante chides Lulu for getting in over her head, Nina blasts Valentin for lying to her, and Peter tries to turn the tables on Jason!

Stinging from his breakup with Ava, Griffin found comfort with Kiki, who was still hanging around aimlessly after the Nurses Ball worried about her situation with Dr. Bensch. As the two head up to his room at The Metro Court with a bottle of champagne, Kiki proposes a toast. “To first times,” she smiles as she clicks her mug against the bottle in his hands. Could these two find more than comfort with each other?

At home, Dante rails at Lulu for getting mixed up in the whole Henrik/Peter debacle and not even realize that she was working for the same guy she was attempting to locate. “Congratulations!” he snarks. “You confided in the guy who was setting you up!” Will this inspire Lulu to give up on her journalistic ambitions? 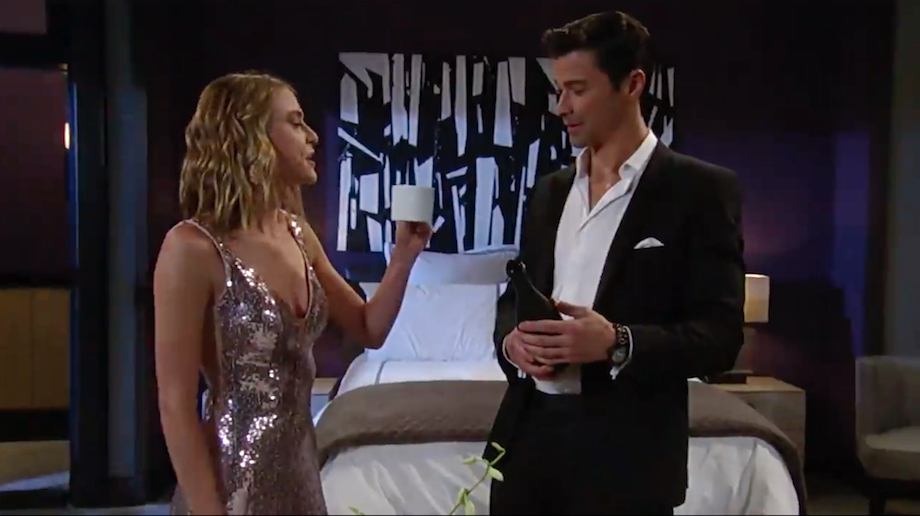 How close will Kiki and Griffin get? (Photo Credit: ABC)

Valentin manages to get out of jail and return home to Wyndemere where he finds an angry Nina waiting to blast him for lying to her and keeping Peter’s secret that he’s really Henrik Faison. And when he attempts to explain his side of things, she retorts: “Do not ask me to feel sorry for Peter August!”

Now that Anna has confessed the truth that Peter is her son, she’s grateful that Finn continues to stand by her side for support. “I’ll look after your son,” he promises. And at the police station, Robert stands by the table where a cuffed Peter is seated, under arrest. But Peter informs Detective Chase that he wants to turn the tables. “I want to press charges against Jason,” he yells, pointing at him. “He tried to kill me!” Jason stands in the doorway of the interrogation room with Sam behind him, staring down Faison’s son. This is going to get ugly!

Haley Erin Teases “Maybe There Are Feelings” Between Kiki and Griffin

Who Is Peter August? — Wes Ramsey Speaks Out!