Big drama is happening in these GENERAL HOSPITAL spoilers, but it’s not going to be good news for everybody! Finn and Chase continue to clash, Dr. Bensch is still making Kiki’s life miserable, Griffin lashes out at Ava, and Carly worries she’s losing her mind. Although things could be looking up for Jason when Sam shares her big news!

Alexis tried to bring the two brothers together, but while Chase seems to want to make things right, Finn wants absolutely nothing to do with his sibling. “This is none of your business,” Finn argues. Just what is causing this deep-seated animosity between them and can it ever be healed?

Over at the hospital, Kiki gets some bad news. “I’m gonna request that you do another tour with me,” Dr. Bensch informs the med student. Is there any way for her to get out from under his thumb? 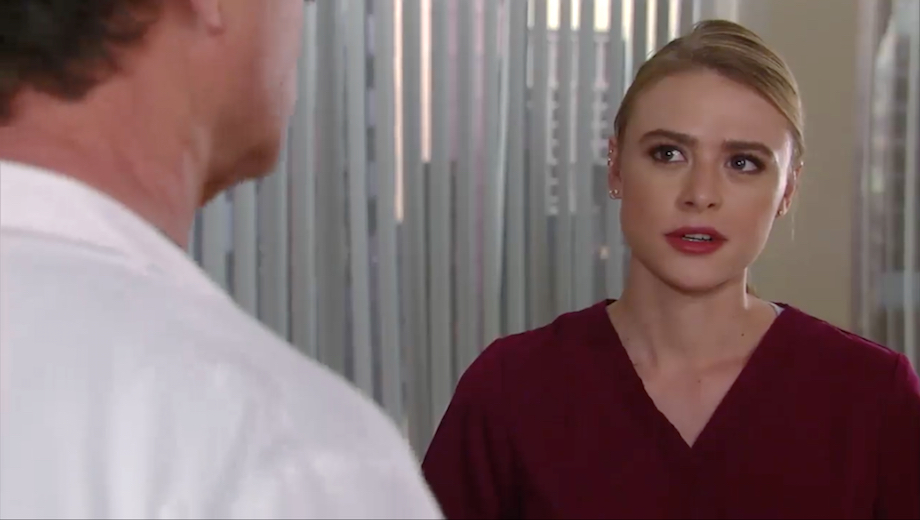 Looks like Kiki will be stuck with Dr. Bensch a bit longer! (Photo Credit: ABC)

Griffin angrily confronts Ava over not telling him the whole truth about the deal she struck with Sonny for Avery’s custody. “I dropped the charges against Mike!” she insists. But Griffin reminds her: “He’s innocent!” Has the former priest finally come to the realization that he and Ava will never be on the same page?

Sonny has a lot on his plate right now, but dealing with Mike and Avery is just the tip of the iceberg. “The bigger problem,” he admits, “is Carly.” And over at The Metro Court, Carly confides in Lucy. “I feel like I’m losing my mind!” she says, panicked.

With Jason hot on Henrik’s trail, Anna hopes Robert will be on her side. “I have to stay one step ahead of Jason,” she declares. But can she? She might have a slight advantage now, since Jason gets some big news that could prove slightly distracting for him. “Drew and I are getting a divorce,” Sam informs her ex. Jason’s blue eyes light up with hope, but he’s going to have to play this very carefully if he hopes to win Sam back in the end!

The Amazing Emmy Moments You Didn’t See on TV