Decisions need to be made in these GENERAL HOSPITAL spoilers. But while Julian and Franco seem to find themselves unable to commit, Ned, Michael, and Sam appear to know exactly what they want. But will any of them be able to follow through?

Olivia thought that Ned would be the perfect guy to take over for the corrupt Mayor Lomax and bring Port Charles into the future, but he’s not nearly as confident. “I’m not running for mayor,” Ned promises his wife. But Olivia might not take “no” for an answer!

Carly continues to worry about Nelle’s influence on her son, but Michael is starting to get a little tired of his mother’s constant interference. “I see Nelle for who she really is,” he insists. But does he really know what his pregnant ex-girlfriend is really up to? Carly doesn’t seem particularly convinced!

Molly wants to fight back against her terrible landlord and the ongoing plans to gentrify the Charles St. district of Port Charles, but Alexis worries her idealistic daughter may be in a bit over her head. “I don’t want you to escalate this,” she warns Molly. But will the young woman listen? Meanwhile, Jim Harvey is back to pressure Julian into selling his bar. “You want me to sell the place I just bought?” Julian asks, confused. 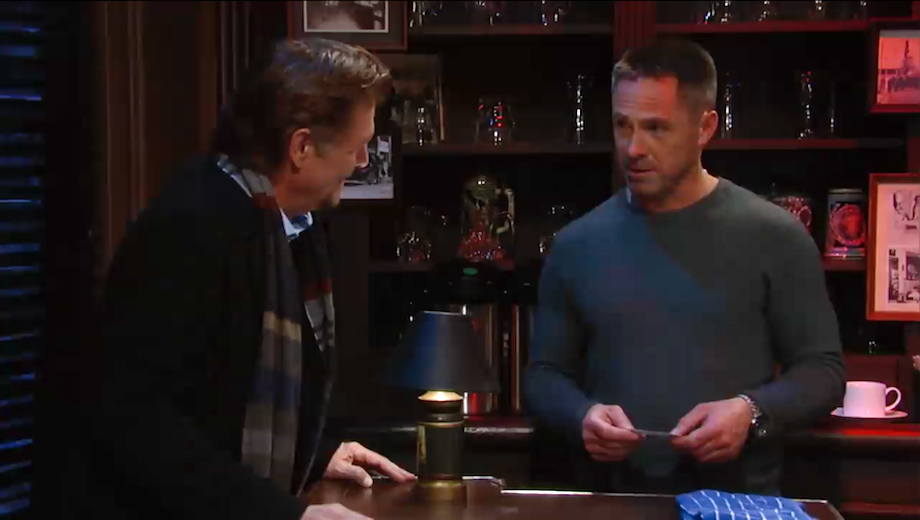 Will Julian give up the business giving him a fresh start? (Photo Credit: ABC)

Laura has been on Cloud 9 since tying the knot with Kevin, and pays Liz a visit to share the joy. “Love can just surprise you, can’t it?” she asks. Unfortunately, Liz may have had enough of surprises where her own beau is concerned, but there’s one more yet to come! Franco stares obsessively at the painting he did of himself and Drew as children, trying to unlock the mystery in his head. “Why won’t you leave me alone?” he hisses at the canvas.

Sam has decided to prove her commitment to Drew by becoming his legal wife again, since their marriage has been rendered invalid by Jason’s return. However, the 24-hour waiting period between getting a license and tying the knot isn’t the only obstacle in their way — she’s still technically married to Jason! So with every intention of leaving the past behind and making a new future with Drew, Sam announces: “I need a divorce.” But will she get it?

Relive Sam and Jason’s Most Romantic Moments on GH