There’s danger all around in these GENERAL HOSPITAL spoilers! Robert realizes the truth even as Valentin warns Peter his secret is out, Ava threatens Sonny’s family, and Jason, Sam, and Spinelli find themselves in big trouble!

Robert has been trying to help Anna with her investigation to locate Henrik Faison, but now he’s finally come to realize the shocking reason why she’s so intent on finding the man. “He’s not just Faison’s son,” Robert marvels, “he’s also yours.” Will Anna confirm or deny it?

Valentin has been lurking around the fringes of Peter’s life ever since he came to Port Charles, and it’s clear he has a vested interest in keeping his real identity secret. Which is why he’s quick to warn Peter: “Nina is on to you.” And when Maxie shows up at Spoon Island, Nina grabs her arm to keep her from entering into the house. “Hey!” she exclaims. “What are you doing here?” What is she trying to keep Maxie from discovering? 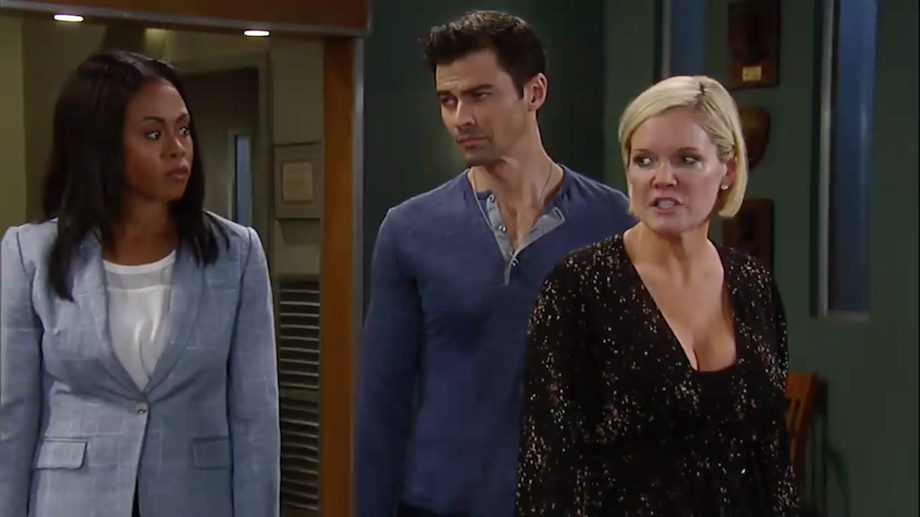 Nelle has been focusing all her attention on gaslighting Carly, but now she has a quiet conversation with her babydaddy. “I have reason to be optimistic,” Michael tells her. But are they still on the same page about their unborn child?

At the police station, everyone is glad that Mike and Avery were found and brought back safe and sound. But when Sonny wants to take his family home, Ava stands her ground and refuses to let him include Avery in that group. “One more step,” she warns, “and your whole family will pay!”

Over in Switzerland, Jason, Sam, and Spinelli are undercover working to dig up information on Henrik, but their elaborate scheme at the bank has hit a major snag! “If you touch that,” Spinelli warns, “we’re dead.” Can they learn what they need to know and get out before it’s too late?

Spinelli Back on GH Permanently? — Bradford Anderson Speaks Out!