Thanksgiving in Port Charles is full of surprises in these spoilers from GENERAL HOSPITAL! Nathan suspects something is up with Maxie, Jason worries he’s losing everyone he’s come to care about, and Sonny and Carly finally meet Oscar’s mom!

Alexis has gathered family and friends together to celebrate the holiday, including T.J. and Stella. But the real surprise is that Dr. Bensch is also joining them! “Happy Thanksgiving,” the doc announces, holding up a plate of food. “Who’s hungry?” After all the effort Alexis put into helping get Julian exonerated for his crimes, is she also still pursuing a relationship with Dr. Bensch? Or did Molly invite the guy in the hopes of pushing her mom and him together?

Over at Dante and Lulu’s, Nathan sits having a beer with his pal and asks, “Have you noticed something weird about Maxie lately?” Meanwhile, on the other side of the room, Lulu keeps her voice down to a whisper so the guys can’t hear them. “Are you pregnant or not?” she excitedly asks her friend. Is Maxie about to start a family with Nathan or was this just a false alarm? 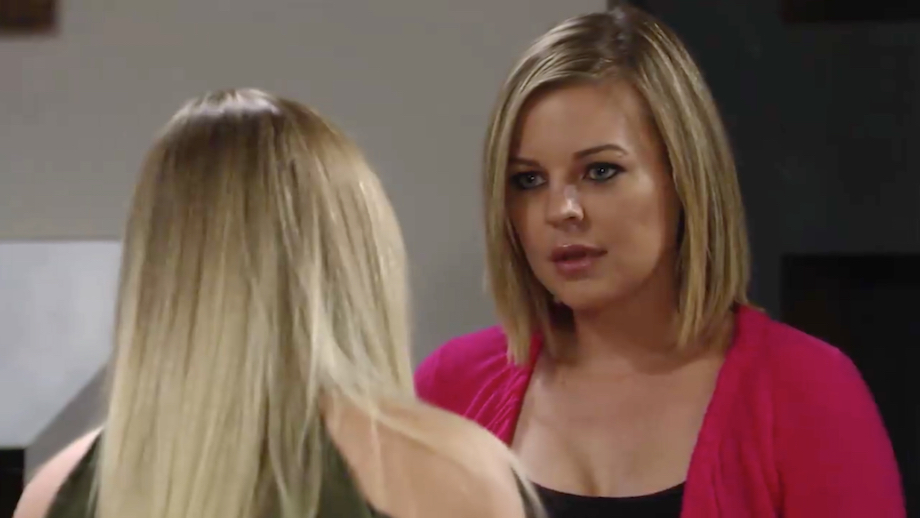 Lulu wants to know if Maxie has a bun in the oven this Thanksgiving! (Photo Credit: ABC)

Monica was one of the few people in Port Charles who assured Jason that she believed in him, but even she now seems convinced that Patient Six is the real Jason Morgan. With everyone seemingly abandoning him left and right, Jason stops by the Quartermaines for some reassurance. “I just need to make sure that we’re still good,” he confides.

Sonny and Carly have invited Oscar’s mom, Kim Nero, to join them for Thanksgiving, and they open the door to welcome her. How long will they be able to maintain casual small talk before they start questioning her about Oscar’s mysterious father?

Sam has been torturing herself now that there are two Jasons in her life because she doesn’t know which one to choose. So when Patient Six pays her a visit, seeing her husband’s old face brings up all kinds of feelings she doesn’t know how to deal with. “I need you to tell me what you want me to do,” Six asks. But does Sam even know herself?