The search for the truth is getting complicated in these GENERAL HOSPITAL spoilers. Ava is getting desperate to find her missing daughter as Dante thinks he has a lead, Jason, Sam, and Spinelli are on the case in Switzerland, and Carly can’t believe Sonny isn’t on her side!

After broadcasting their appeal for information regarding Mike and Avery’s whereabouts, Ava remains at the police station in case updates on her daughter come in, but she’s getting frustrated at the PCPD’s performance. “Why isn’t Jordan still running point on this?” she wonders to Griffin. And outside in the station, Dante is convinced he knows where they’ve gone, but urges Chase to keep a lid on it for now. “We don’t wanna get people hopes up,” he cautions, “until Mike and Avery are safe.”

In Switzerland, Robert knows Anna well enough to know when she’s keeping something from him. As he watches her checking her hair in the mirror, he asks: “What aren’t you telling me about this case?” Will she come clean about her connection to Henrik? Meanwhile, Jason, Sam, and Spinelli put their plan into action. “You and your bank are at my mercy,” Spinelli declares confidently. 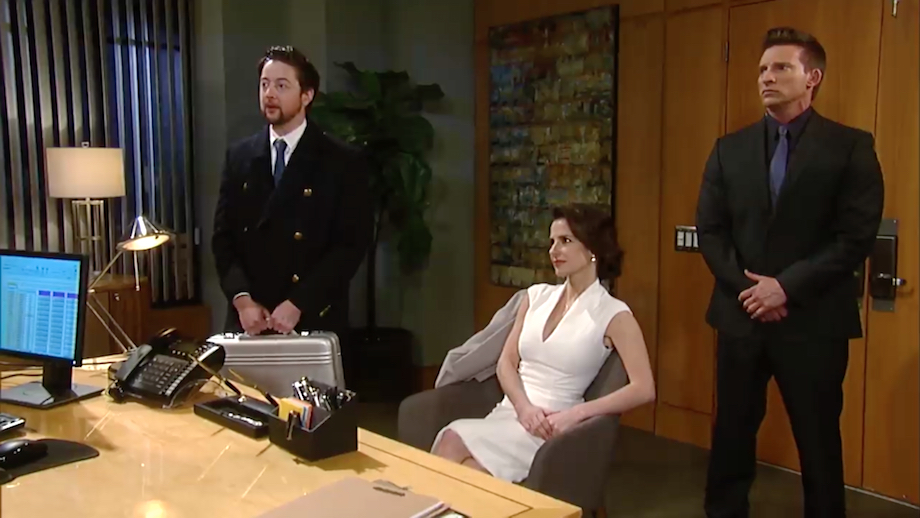 The dream team is on the case! (Photo Credit: ABC)

At Charlie’s Pub, Lulu has an update for Peter. “The man claiming to be Henrik Faison got back to me,” she reports, showing him her phone. Peter just smiles back at her enigmatically. Is Lulu going to find herself in danger all over again?

After updating him on the fact that Griffin found nothing medically wrong with her, Carly can’t believe that Sonny seems to agree with the doc’s suggestion that she’s imagining being haunted by memories of Morgan. “Do you really think I’m making this up in my head?!” she cries. Will Sonny offer his wife support or just make the situation worse?

Maurice Benard Mourns the Loss of His Beloved Dog, Cain

Leslie Charleson Temporarily Recast as Monica Due to Injury

You Pick the Winners in Our Daytime Emmys Poll