Summer has only just begun, but things are already heating up in these spoilers from GENERAL HOSPITAL with make ups, breakups, and shake ups!

Carly was determined to divorce Sonny, but he was just as determined to keep her in his life, even going so far as to bring her to his island casino under the pretense of business. But while Carly was initially resistant, it looks as though the tropical weather and Sonny’s charm has finally done the trick! “I can’t live without you,” she cries, falling into his arms for a passionate kiss. But with another mob boss gunning for Sonny, will their newfound happiness be short-lived?

Jordan and Curtis seemed to be doing all right, at least until his Aunt Stella showed up to make trouble! Now Jordan’s pushing the hunk away, but he’s not about to let her escape that easily, getting very up-close and personal with the police commissioner in the PCPD interrogation room. “You may have decided that we’re done,” Curtis whispers to Jordan. “We’re not.”

MUST SEE: Laura Wright Opens up About Her Divorce and New Romance! 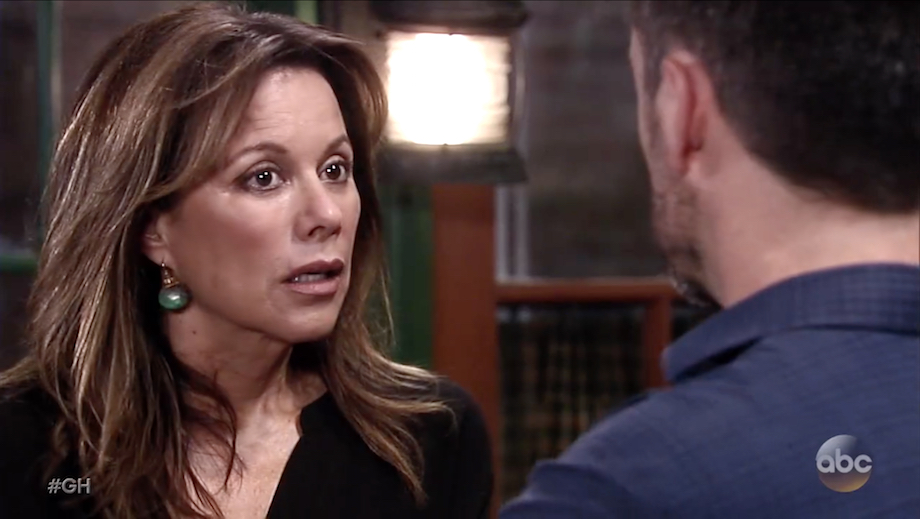 Alexis and Julian’s relationship has always been complicated, but now it’s a mystery that nobody seems to be able to solve! He’s trying to make amends for all the wrong that he’s done, and Alexis seems as though she’s on the verge of forgiving him and taking him back. But Kristina isn’t exactly on board that particular train, asking her mother, “What’s going on with you and Julian?” The ex-marrieds look at each other nervously. Will they be able to come up with an answer that will satisfy Kristina? Or themselves?

Check out this tease for the exciting week to come, and for more GH previews, keep reading the ABC edition of Soaps in Depth magazine!

Why the Actress Playing Nathan’s Publisher Looks So Familiar!

Maurice Benard Is So Excited For His Upcoming Fan Events He’s Dancing For Joy!

Emme Rylan Can’t Wait For the Birth of Her Daughter!