Nobody can escape their past in these spoilers from GENERAL HOSPITAL! Alexis is drawn back into Julian’s orbit, Finn is challenged to save a life at the hospital, and Cassandra makes moves that could threaten Valentin’s world even as he threatens Anna!

Having been told that Julian was beaten to within an inch of his life in prison, Alexis ignored Diane’s advice and went to visit her ex behind bars. Looking at Julian’s bruised face through the glass, Alexis fears the worst. “Is this payback for something?” she asks. “Are you being targeted?” Is Julian truly in danger from his fellow prisoners? Or is this just an elaborate scheme to get out of jail free?

Despite Nathan wanting nothing more to do with Man Landers, Maxie insists that they continue the charade so she can write her expose for Crimson and secure her job. But she’s a little put out when her husband informs her: “Amy’s not going anywhere.” Is three going to be a crowd? 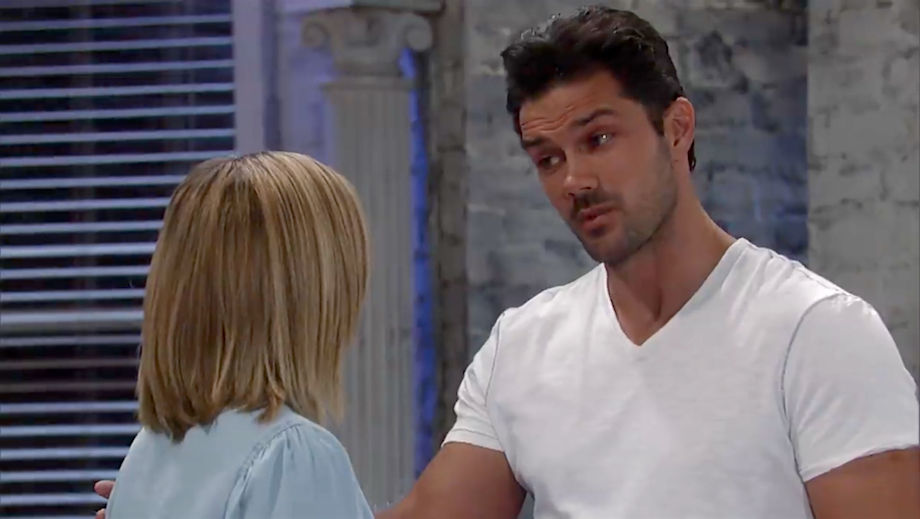 Nathan has a warning for Maxie! (Photo Credit: ABC)

At the hospital, Finn is enlisted by Monica to help with a very serious case. “If you can’t treat it,” she reports, “it could be terminal.” Does this have anything to do with the rash of drug overdoses the doctors have been seeing at the hospital lately?

Cassandra remains determined to insinuate herself into Valentin’s life in Port Charles and approaches Nina at the Metro Court where she’s having ice cream with Charlotte. “I think we’re going to be very, very good friends,” Cassandra declares with a big smile. Will Nina catch on that she’s not who she’s pretending to be?

And over at Anna’s home, she’s confessed to Valentin that she wants to bust Cassandra for drug running and wants his help. Unfortunately, he’s not eager to go along with her plan. “Back off,” he warns, “or I will blow your investigation!” Can these two possibly find a way to work together to get the drugs out of Port Charles?

Kelly Monaco’s Return to DANCING WITH THE STARS!

Who Is Cassandra on GH?