The drama in Port Charles is blowing up in these GENERAL HOSPITAL spoilers! Michael and Nelle are not on the same page, Sam needs help, Liz gets a clue, and Valentin confronts Anna!

At the hospital, Michael gives Kiki an update on his current situation, insisting that despite the fact that Nelle is carrying his baby, they will never be one big, happy family. “Nelle understands there’s no future between us,” he promises. But down the hall, Nelle is trying to rope Ava into her latest scheme to keep Michael in her life. “If I’m going to pull this off,” the expectant mom whispers, “I’m going to need your help.” What, exactly, does Nelle have up her sleeve this time, and will Ava risk her new life by getting involved?

After Drew turned down Alexis’ request for an endorsement from Aurora Media, Sam took her mom over to Charlie’s Pub for lunch. And now that they’re sitting at the table alone, Sam leans in to confide: “I have a favor to ask you.” What can Alexis do to help her daughter? 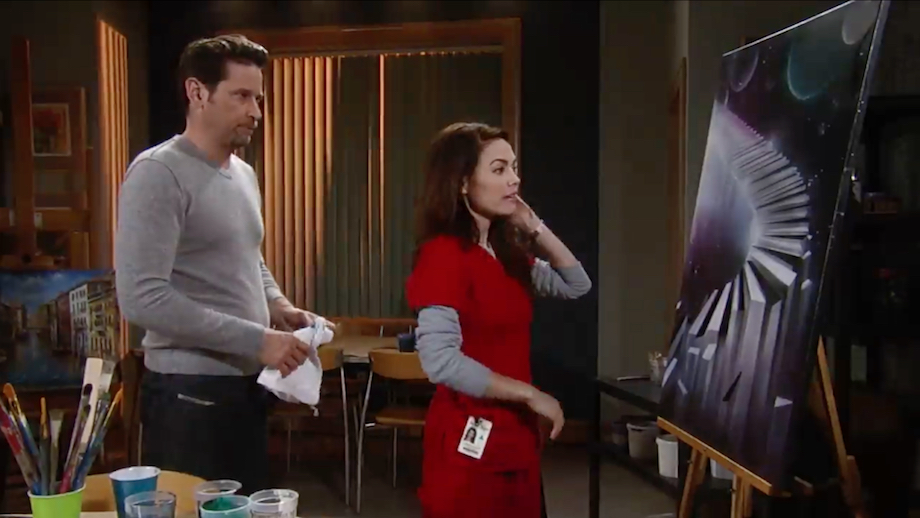 Liz is branching out into art interperetation! (Photo Credit: ABC)

Franco has been wrestling with his inner demons lately, worrying that he’s not as reformed as he thought he was. But Liz continues to support her fiancé, and taking a look at his new painting, offers some insight. “I think I know exactly what it means,” she muses, pondering the canvas.

Drew was surprised when out of the blue, Peter gave him a letter of resignation. “I refuse to accept this,” Drew says, pushing the paper back across the desk, “without some sort of explanation.” Meanwhile, it looks like Jason might be getting a new place to live in Port Charles. “What do you think?” Carly asks, excited. Judging from the smile on Jason’s face, he likes it!

Anna went to Wyndemere to talk to Obrecht about Faison, but after Nina reminded her that this isn’t the best time because they’re grieving, she tried to leave. But then Valentin dropped the bomb on Anna that she should ask him what he knows about her and Faison’s child! Desperate to keep that secret under wraps, Anna holds back tears as she attempts to flee, but Valentin stops her. “If you leave now,” he teases, “you are missing the best part of the story!”

Don’t miss this tease for today’s part of the story, and for more GH previews, keep reading the ABC edition of Soaps In Depth magazine!

“If you leave now, you are missing the best part of the story.” #GH pic.twitter.com/lBA19BO2cw

Kirsten Storms Shuts Down Pregnancy Speculation in an Angry Post