Everyone was hoping to discover the truth about the two Jasons, but in these spoilers from GENERAL HOSPITAL, it looks like the answers will only lead to more questions! Meanwhile, Alexis is eager to help Julian, Maxie has a solution to her dilemma, and it looks like Nelle and Michael might be thrown back together again!

After witnessing Julian being assaulted behind bars, Alexis has been desperate to help her ex-husband somehow. But after Ava refused to help her brother and noted that the Jerome name didn’t carry much weight anymore, Alexis realized she was going after the wrong sister. Learning that Nora Buchanan was Olivia Jerome’s attorney, she pays the lawyer a visit. “How could Olivia Jerome save Julian?” Nora asks. Just what does Alexis have in mind?

Amy was devastated to learn that her brother had become addicted to painkillers, and even more so that he is resisting her attempts to help him. Laying in his hospital bed, Chet asks Nathan for help. “I’d appreciate it if you took my sister out of here,” he requests. But will Nathan go along with it or take Amy’s side? Meanwhile, Maxie has been struggling with making Nathan and Amy’s whole Man Landers scheme work for her benefit, and seems to have hit upon a solution. “I just had the idea that will solve our problems!” she suddenly declares to Lulu. Naturally, Lulu looks a little nervous, as anyone should when Maxie has one of her crazy ideas! 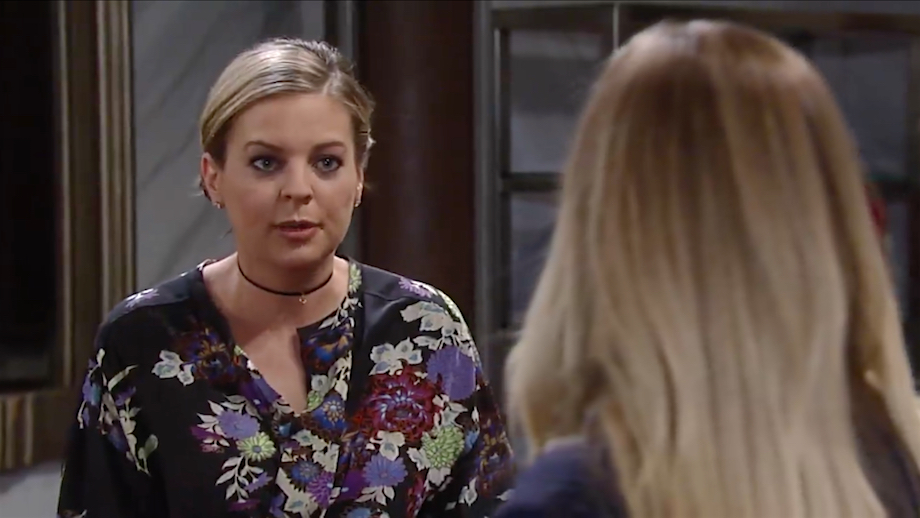 Maxie’s got a plan, so watch out! (Photo Credit: ABC)

While both trying to get away from it all, Michael and Nelle run into each other at The Floating Rib. When she tries to leave and give him his space, Michael stops her. “There’s no reason we can’t have our peace and quiet at the same time,” he suggests. But while he likely means sitting at separate tables, will Nelle somehow find a way to use this opportunity to weasel her way back into Michael’s life?

Since Franco has been digging around for dirt on Jason and Andrew, Scotty is convinced that his son must know something about the mystery that has all of Port Charles buzzing. “Which one is the real Jason?” he demands. But does Franco even have a clue? Because Jordan has arrived at Sam and Jason’s home where they have gathered along with Carly, Sonny, and Patient Six to deliver the shocking DNA test results. “The two men share the same DNA,” Jordan reports. But even if the two men are identical, only one of them can be the real Jason Morgan — the question is, which one is it?