Some people are planning for the future in these GENERAL HOSPITAL spoilers, but as the fire at Wyndemere rages out of control, it looks as though not everybody will have a future to plan for! Can anyone rescue Peter before it’s too late?

Josslyn and Oscar are getting cozy on the couch, but the young woman suggests something more. “Maybe we could take this upstairs,” she says coyly as Oscar looks nervous. Are these two ready to take their relationship to the next level, or should the teens leave things as they are?

After first meeting Drew at the park when she accidentally squirted mustard on him, Margaux has a much more pleasant second meeting with the guy, sitting down with him at the Metro Court. But he’s curious as to what she’s really after. “What business does a D.A. have with my company?” he asks with a nervous chuckle. 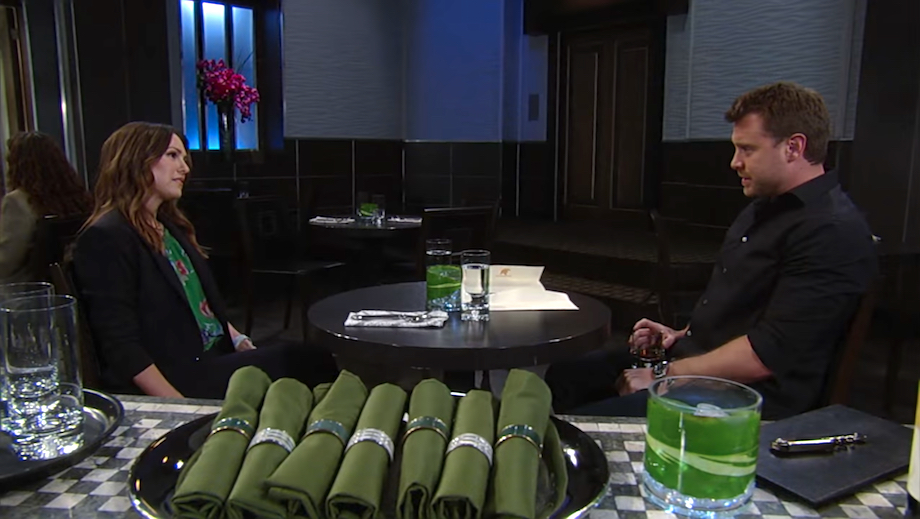 What does Margaux really want from Drew? (Photo Credit: ABC)

Things have been going well for Julian and Kim, but it’s starting to look as though they’re not entirely on the same page. “I can’t promise you,” she admits, holding his hands in hers, “sharing my life with you.” Is Kim not interested in the same kind of relationship that Julian is?

As the date of their baby’s birth nears, Lucas begins to worry about his and Brad’s adoption of the child somehow going wrong. At the hospital, he asks Alexis for some legal advice. “Is there any way to ensure that we’re legally protected?” he wonders. But will the attorney have any good news for the prospective parent?

Jordan arrested Obrecht and Valentin managed to rescue Nina, but Peter remains trapped in the burning stables unconscious from the smoke! Standing in the doorway with Valentin looking through the flames for a sign of Peter, Maxie screams: “It’s taking too long!” Finn removes his jacket for protection as he steps into the blaze shouting Peter’s name. But the man also known as Henrik Faison is laying out cold on the floor. Will they get to him in time or has Obrecht managed to take revenge by killing Anna’s son?

Elizabeth Hendrickson Teases Margaux’s Past Will Soon Be Revealed!

Elmarie Wendel, Who Played Peg on GH, Has Passed Away at 89